Since it is National Bullying Prevention Month, additional focus has been going around about bullying. In July, New York State implemented The Dignity for All Students Act. The act is so fresh and new that a lot of people are still trying to understand how it will work to protect children that are victims of bullies. 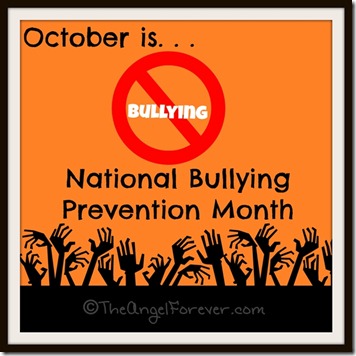 The sad reality is that many children are bullied day in and day out. My son has had to deal with this multiple times in his short life, and I have even seen it with younger children. Several years ago, I wrote a post about bully battles that were happening to NHL. He was in second grade and everything seemed to be coming unglued. Dealing with bullying was not something that we needed to add to the mix. Since it’s National Bullying Prevention Month, I thought I would share this in the hopes that it would spur some more important conversations. The reality is that kids often need our assistance and many times may be too scared or unsure of how to ask for it. Taking the time to open the lines of communication is key.

Growing up is hard to do. Kids these days have more responsibilities and items on their plate than many of us did when we were children. Many times, there are things happening at school that our children do not tell us about, even if we have open relationships.

Why? Well, perhaps they are afraid, feel it is tattle-telling, or have been told not to utter a word. As a parent, it is so hard to know what is going on in the mind of our children. Yet, we often know when something is not quite right. Sometimes we see behavior changes, other times our children regress, and, worse, some try to get away from everything going on within their part of the universe. As parents, we need to try to help our kids to know what to do. 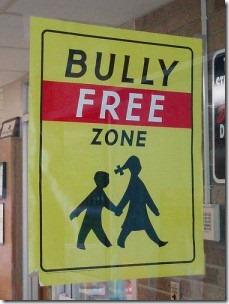 The topic du jour in schools around the country is bullying. Educators are trying to reach out to kids, parents, and fellow teachers to help with this matter. Bloggers all over, including my husband (TechyDad) have written about this topic in recent weeks.

What is a bully? According to the definition a bully is a blustering, quarrelsome, overbearing person who habitually badgers and intimidates smaller or weaker people. Some people may not believe that a child in elementary school could be a bully. Do not be so naïve. It happens and happens often. Bullies these days not only push other kids physically, but they often use verbal tactics to taunt their targets. If they know a child is not as socially suave, they try to goad them. Kids are smart. They know when another individual may take the blame for something just to be accepted. This, too, is a form of subtle bullying going on in schools today.

Recently, I was waiting with my son before an after school commitment. Several children were inside the room and I did not want to leave until an adult arrived. The kids knew I were there. Even with me in sight, they started to make fun of my child. They wrote his name on the board. NHL is a ______! My child did nothing. He just stood there ignoring it. The kids were getting upset that he was not responding, so they upped the comments. They then started calling him rude, nasty names, and wrote it on the board.

After a few minutes, I went into teacher mode. I stormed in and asked if they wanted me to take a picture to show their parents their work. Perhaps they would be proud of what they had done. My child continued to ignore the situation. Was he oblivious, or so hurt that he was bottling up his feelings and withdrawing from the negative environment? Once an adult arrived, I went to report it to the person in charge. I will spare you with the details, but suffice to say they were ill prepared to deal with the bullying going on.

So my question to you. As a parent, how do you help your child when you know they are being bullied, but do not want to open up about the situation?

There are so many other items that could be mentioned now, but perhaps those will be for another day. For now, please help to educate your children about the dangers of bullying and talk to them frequently so they feel comfortable talking with you.

Disclosure: Parts of this post were previously published on a project I worked on during the my son had this experience. The text is mostly the same, but I placed a new introduction to go along with National Bullying Prevention Month.