About four years ago I made a very difficult phone call. JL and I decided it was time to have NHL evaluated with Early Intervention. Our little guy had been talking sentences for quite some time, but he could not walk on his own. He had no real ability to balance if a finger was not held by an adult. After a while, daycare convinced me that it could not hurt to see what happened.

For weeks we worried. Was there something more wrong with NHL’s legs. We went to pediatric neurologists to rule out many different items. They all agreed that it did not present itself like CP or MD. Instead, they believed that he was hyperflexible and had low muscle tone. Their thought was that with some major physical therapy he would not only be able to walk, but eventually catch up to his peers.

NHL has been receiving physical therapy for almost four years. He walked on his own just a few weeks after starting (fluke) right before his second birthday. Soon he was running, jumping came quite a while later and just this weekend we added bike riding to the list.

If you saw NHL with a group of his peers, you would never know he had low muscle tone. These days the only thing that lets us know is gets tired more quickly than other children. This is because his body works extra hard just to stay upright and balance – without adding walking/running/jumping into the mix. We often forget about this and do not understand why he gets tired and a little grumpy after a long day at school or when we go running around on errands.

Here is NHL getting ready to test out his new bike at home for the first time. Helmets are a must before getting on. 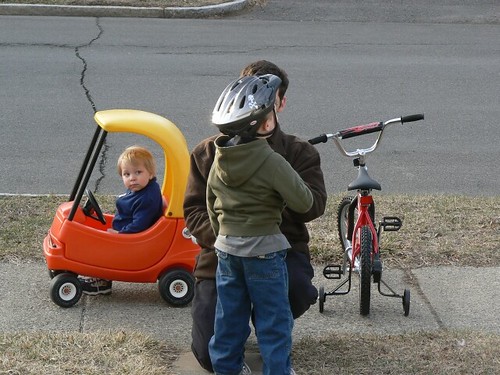 Even JSL was happy to be outside in the gorgous weather to watch his big brother. He loved following everyone in his "car car" after being cooped up in the house for the week. 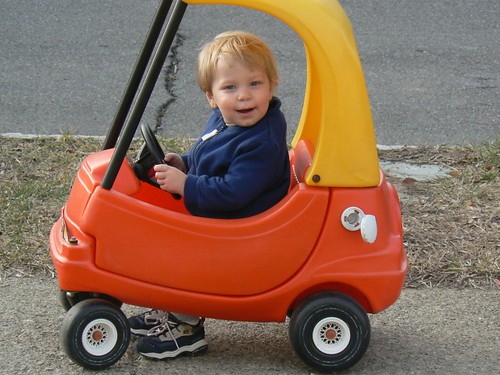 Next thing I knew, NHL was off . . . riding his bike down the block. 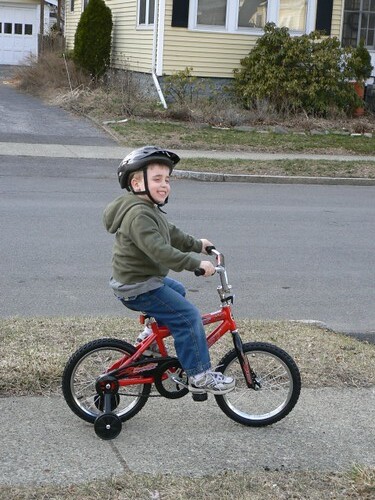 The smile on his face made us feel so great.  We think that secretly he had always wanted to ride a bike, but was too frustrated to ask. Finally his dreams were coming true thanks to all of his hard work in physcial therapy. NHL was so proud and wanted to show everyone his new bike.

At first he asked for a few pushes to give him some momentum. Then he teased JL, asking for help and then riding off just as he arrived at the bike. Yes, he really was riding a bike and kept it up until the sun was going down. 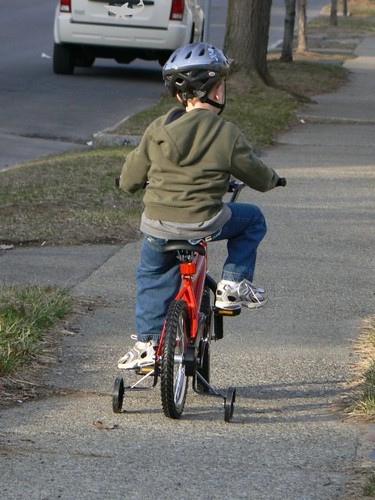 Now NHL hopes that the rain will stop and it warms up so he can enjoy the so-called spring with his new bike and little brother following along in his car. 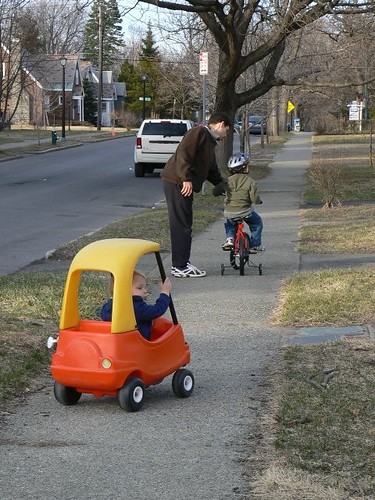 Thank you to all of the therapists that have helped NHL to come so far!

How do you forget a child?

JL called me on his way home to tell me about a note that was in all of the cubby’s today at NHL’s nursery school/daycare center. Here’s what the note said:

Dear Parents,
Today one of the classes was playing at the park. When they left the park they checked that they had all of the children and made a mistake. One of the children was left. Fortunately two hospital employees saw her, brought her into the hospital and called the center. The assistant director went and got her. She was fine and not aware that she was lost. I called the Abuse Hot Line and reported the incident and called the Office of Children and Family Services, our licensing agent and reported the incident. They will be doing an investigation involving parents and staff. I will be meeting with classrooms to make sure that procedures are in place so that this does not happen again.
The teachers that were involved are wonderful, long term employees. They are devastated that this happened. Please come and talk with me if you have any questions.
The Daycare Director

Needless to say I was floored. I know you can make mistakes, but how can you make a mistake counting only 10-14 kids? I am a teacher and know it’s tough to keep track of kids (granted 3-4 year old must be worse), but I did it with 32+ kids on field trips to places like NYC and Boston.

So I think I am going to call Madame Daycare Director tomorrow. I think I should be able to know if it was my child’s room. Especially given recent events that happened in the room with the chin incident. (Refresher – the day before NHL split his chin open in the bathroom by slipping on water I witnessed 4 children in the bathroom playing with NO teachers and a wet floor. I had planned on called to report it, but had to meet my child in the ER for stitches before I was able to make it there).

The good news – next Friday (NHL’s 4th B-day) is his last day there. After that SAHM is here with both boys until NHL starts public PreK.

After I took JSL to the doctor we went to the daycare center for NHL’s parent teacher conference. This was the first one that I have gone to. When we got there the daycare director said that afterward she wanted to introduce us to JSL’s teachers for the fall when he starts going there. I was relieved to hear that JSL will not be in the same infant room that NHL was in. It’s not that it was a bad experience, the head teacher just isn’t warm and fuzzy.

So, JL and I talked with NHL’s teacher about how things are going. She said he’s testing things a little more, but she doesn’t think it is necessarily his baby brother and is likely just the age (almost 4). She was really great. It’s amazing how she really knows NHL after being in the room such a short time. I think her evaluation was the most accurate one that we’ve had – EVER. We also told her that were not 100% sure about the summer and plans. NHL is going to a new school for the fall and we’re debating what to do for the summer. He’ll be bored home with me every day. So we did ask about possibly sending part time for July and August. The daycare director said it’s a possibility and would get back to us.

After our meeting we happened to meet NHL in the hall since he was in the gym having PT. We promised to meet him in his classroom to show off his baby brother to his friends. So we were finally able to part from him and went to see the new baby room. We met two of the teachers. Interesting to note the afternoon teacher in that room is the woman that left NHL’s current room to retire. I guess it wasn’t really for her and she just needed out of that age group. The nice thing about this new room is the head teacher is a nurse. That calms me down a lot and we saw her as we were leaving. She told us to visit often this summer and chat anytime. I was very happy since the guilt about going back to work in September has already started.

After that we went to see NHL and then took JSL to see JL’s co-workers.

On that note I am off to deal with nose milk coming from JSL again. UGH!