Sunday morning we all got up and Uncle I and Aunt M gave NHL the other part of his early birthday present. Here are some photos of the munchkin opening up he gift. 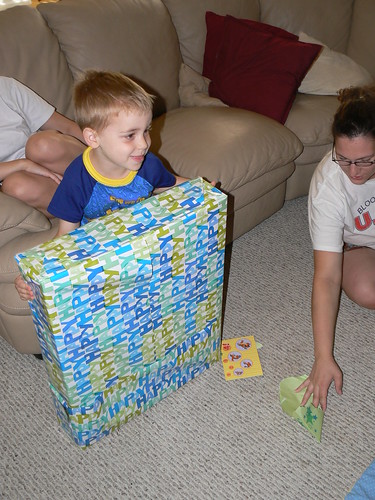 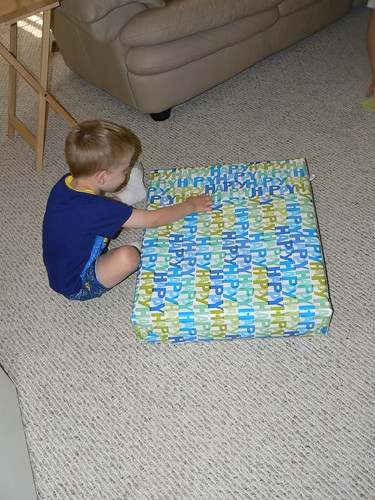 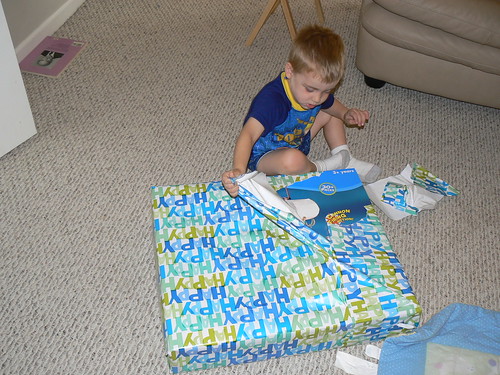 And his reaction when he sees what it is: 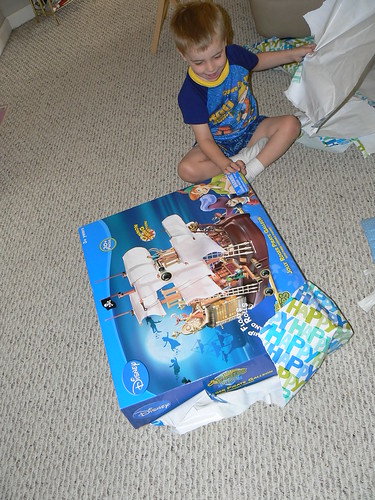 Now it was time for JL to help to put the Jolly Roger pirate ship together. There were 30+ steps and a lot of little parts, but finally it was ready for NHL to play with. 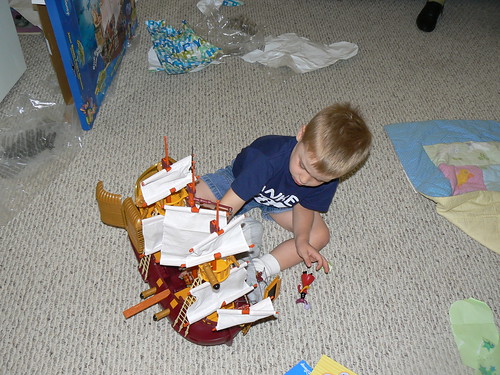 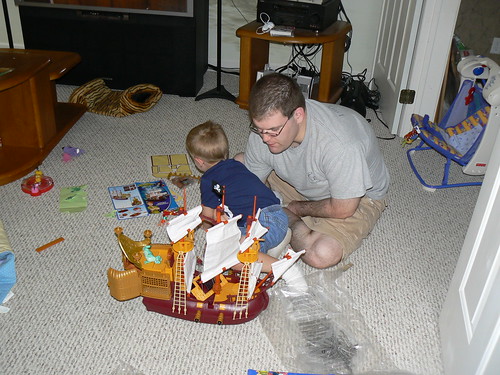 Soon after this Papa and Nana came over. It was Papa’s birthday on Sunday. So everyone was busy getting ready. While we all got ready Papa took photos. 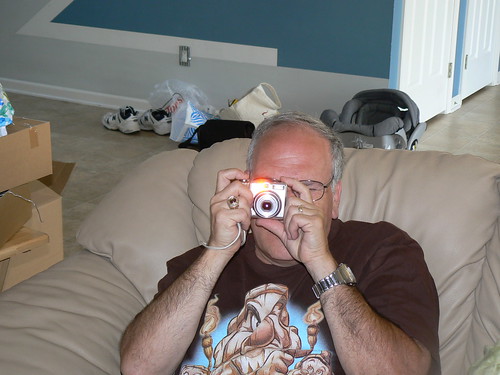 A photo of Aunt M feeding JSL before we went to brunch: 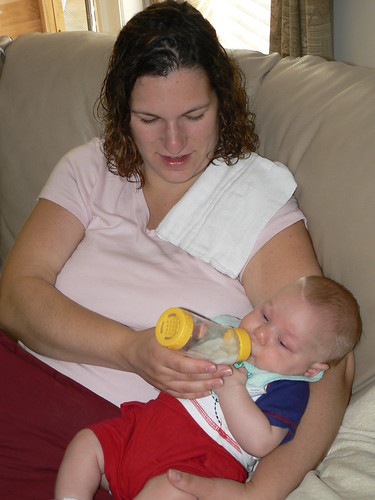 We finally got out of the house at 10:30 to head to the Cheesecake Factory for Sunday brunch. YUMMY! The rents left to go home right after our meal. We went back to pack up and were on the road at 2:10 in the afternoon. So begins the LONG road home (note this trip normally takes 4 – 4 1/2 hours without kids).

Let’s see, at our first stop (the rest area as soon as we got on the road) we were just getting gas for the car. All of the sudden I heard a rumble of thunder coming from the back seat. I got out while we were waiting in line to get the car gas. So I went to take a peak in JSL’s diaper. As I barely touched him I was lucky enough to be the recipient of baby poop all over my hand. So I left JL and NHL and hauled JSL in his car seat carrier into a nasty bathroom to change his entire outfit and diaper.

We got back into the car after the change and NHL started to say he was hungry soon after. So we stopped to get him something to eat and while he ate I nursed JSL in the backseat. Then we were back on the road. Once on the road NHL said he had to go to the bathroom. So for 40+ miles we listened to him tell us over and over that he had to go. So we stop at the next rest area and JL went to take him inside and he wouldn’t go, just a quick pee break. We got back into the car and he had to go AGAIN. So we stopped again at the next area. So JL took him in and again he didn’t go. They got something for us to eat and met us outside. I was nursing JSL who was playing more than eating. I should have known what was going to happen next. As I was nursing him another near diaper blow out. So JL was nice enough to change him while I ate my dinner and stayed to feed him more.

NHL was then asking to play with his new toy when he got home (B-day gift from my Uncle I and Aunt M). I told him he couldn’t if we got home too late and because we had to keep stopping we would not be home. If he would just sit with his buddy and take a nap for a little while we may finally get home. NHL calmed down and went to sleep and JSL cried for almost 40 minutes – likely his gums bothering him.

There were actually points on the trip that JL and I were in hysterics from being so tired. I was on the phone with my mother at one point updating her on our lack of progress on the road and broke into laughter and couldn’t stop. She was worried and soon started to laugh with me as she was telling my father what was going on.

We finally got home at 8:45. JL got NHL ready for bed and I fed JSL. Then it was time to unload the car and figure out why our phones weren’t working. So I was rushing around unpacking dirty laundry and next thing I know

That would be the noise of my toes slamming up against the wall in the hall. I was instantly in agony. I jumped into bedroom and looked at blood coming from a huge crack in my middle toe. I couldn’t move my toes and the crack looked horrible. I called my mother who eventually came out of the shower to rush over and help me close up the toe and tape three toes together. Can you say this just was the icing on the cake?

So I went to bed with my toes throbbing. Luckily it seems like the cut is healing and I can move my toes a little now. I don’t think they are broken, but very swollen and sore.

Here’s a photo of NHL the day after our journey home playing with the Jolly Roger. 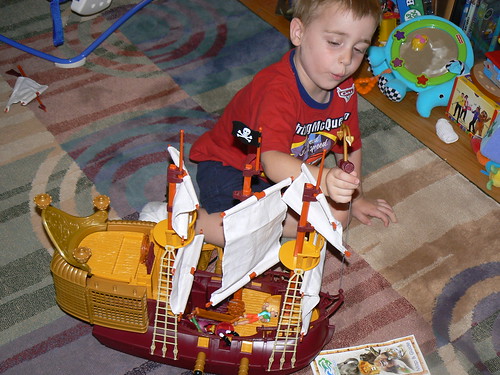 So the moral of the story is traveling with our two kids is a not so good thing. The trip was worth it to be with family, but it will be a while before we hop into the car for a road trip again.