Yesterday was the rescheduled Chanukah party in NHL’s classroom. It had been on Monday, but thanks to the ice storm it was pushed off. When we arrived all of the kids were waiting for us at the circle area. We went over and they "lit the candles", said the blessing, and sang a few songs. After that the teacher explained that the kids would rotate around the centers will all of us. There were 5 total and we went to all of them.

Here are some photos of NHL from when I first arrived and one of JSL with his Chanukah bib on. The last photo at at the first center that we explored. This center was the pretend (dress-up/kitchen) area that also displayed all of the show-and-tell items for "H" day. NHL brought in his travel "Hungry Hungry Hippos" game.

Our next stop was the math center. Here they had a menorah set up to count candles. 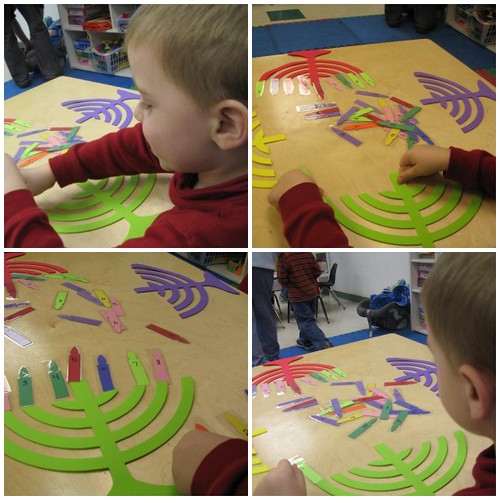 Then we went to the fine motor center. Here they had dreidels to spin and play with. As you can see they had sheets to show the kids how to play. Please note NHL’s teacher took a photo of all of us and I had fun taking a picure of the dreidel whirling around. 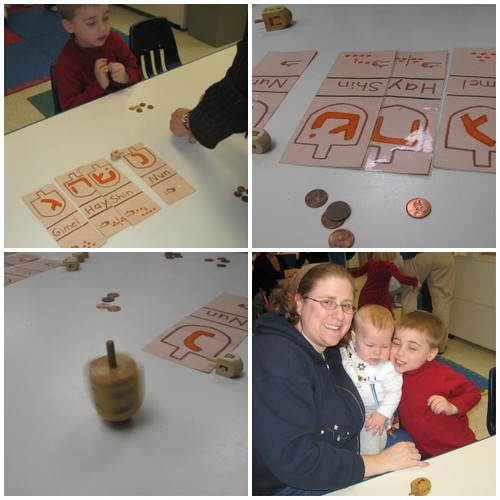 Next we went to the hands-on center area where they had latke tasting for everyone. Here is NHL testing them out with some sour cream and apple sauce. 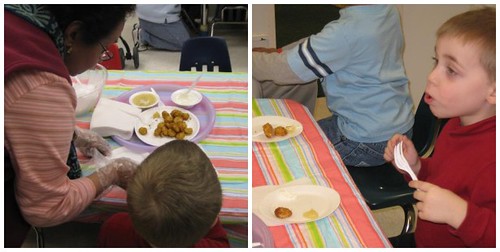 Then we went out to the hall where the motor center was set up. Here the kids had to sit and wait their turn. Then they got onto a scooter and pushed their body on their tummy down the hall. They had to get some Chanukah cards and bring them back to a sheet to make matches on and identify them. These are some photos of NHL doing this activity.

At this point it was already getting late. We barely had time at the block center on the rug. No photos of this, but I did take some of random Chanukah art that was in the hall and within the classroom. 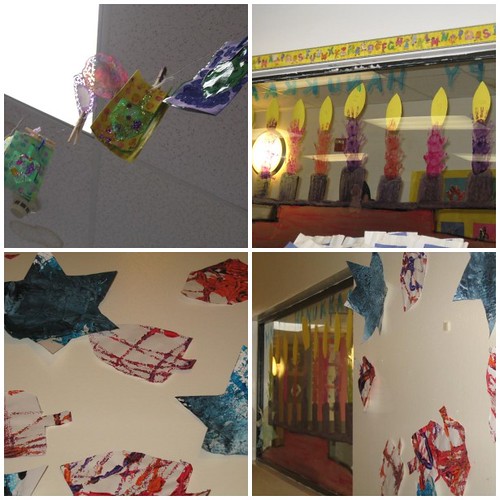 Then it was time to have some brownies and get presents. The kids (and teachers) made the parents photo frames with their photos in them. The teachers also gave a bag of goodies to the kids. It was a very nice hour in the room and we were able to see how centers run, just with a LOT more people in the room. I was floored that almost every child had at least one parent/grandparent there.

With that I will share one more photo of my fun Chanukah socks. (Hey L this is just for you!) 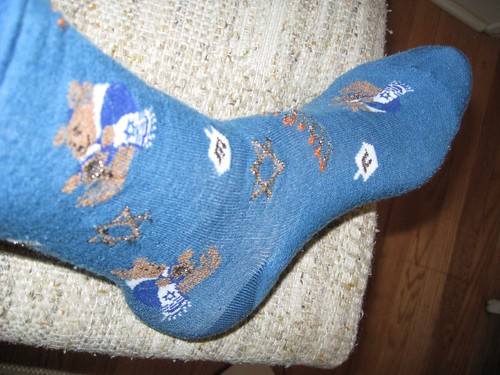 Now it is time to get the big kid into bed. We already have at least 6.4 inches of snow outside and they claim a bigger storm coming Sunday. The bad news – our snow rake temporarily broke while JL was using it on the roof. He did the side that gets ice damns more, but the other side will be finished at a later time.