Sleep . . . . what is that again?  I seriously do not think that JL and I have a clue these days. It has been WAY too long since we have been able to sleep more than 6 hours a night. For me I think it was likely before I was pregnant with NHL (think November 2002), aside from when I am sick.

The last three nights have been VERY rough. JSL is getting at least his top two front teeth and he is a mess. His gums are so swollen, he is clingy, he keeps throwing up, and he whimpers when going to sleep. In addition to this, he wakes up when resting all the time. Naps only last 20-30 minutes unless I am holding his for the entire nap (like yesterday – thanks Mom). Last night he cried through our entire dinner. We were keeping my mother company and had brought things for JSL to eat. He wanted nothing to do with the green beans, rice cereal, or puffs. He just wanted to be held, nursed or cry. Not the happy, smiling baby we are used to. We dosed him up with some Tylenol since he was clearly in pain.

When we got home JSL only wanted to nursed. He fell asleep at that point and we moved him into his crib. He woke up several times and quickly drifted back with a quick binky application. Before we went to sleep I went to check on the boys. Here is how I found NHL: 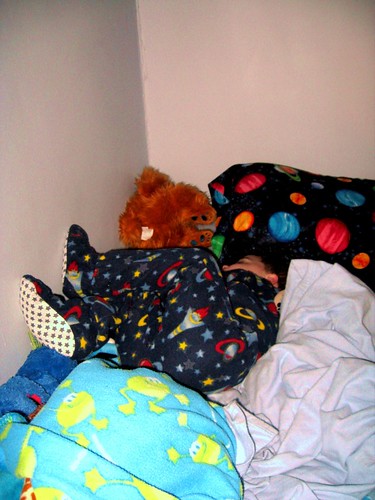 This really dose prove he could sleep anywhere! The night time camera setting did make him stir a little. Here he is seconds later: 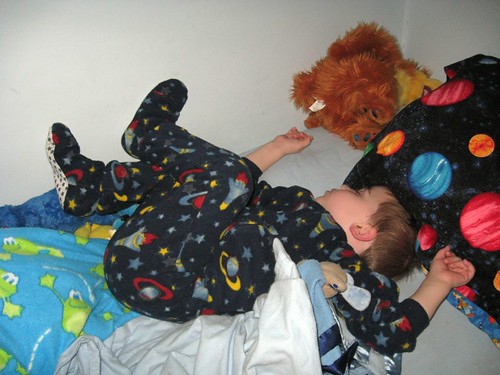 Meanwhile the little teething machine was snoring away in his crib. He was all cozy and happy thanks to the milk and Tylenol. 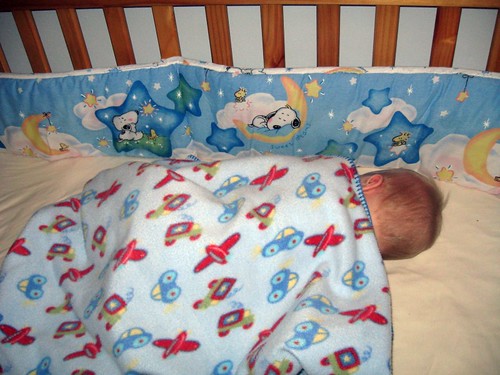 And another view of the sleep that did not last long. 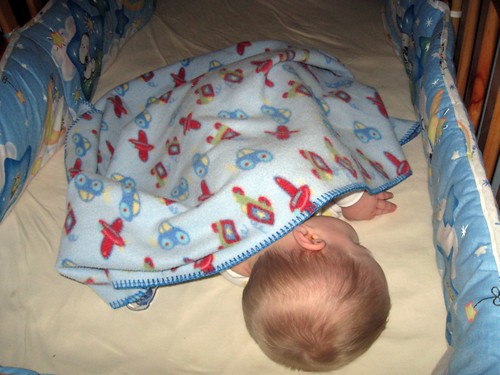 As hinted at this sleep did not last long. At 2:00 JSL was up and crying again. He came into our bed and was ready to party from not wanting to sleep. JL was able to get him to curl up and get back to sleep with us after 30+ minutes. Then at 6:30 NHL woke us up and it was time to get Daddy out to work.

Now I have a little teething monkey asleep on me as I type. He was crying again, so I gave him more Tylenol (it had been well over 12 hours) and he is catching up on sleep. I am off to see if I can convince another little boy to rest so I can as well. I feel bad for JL since I know his boss will not allow him to curl up and nap under his desk.