Monday morning we woke up and went to have breakfast. My father-in-law went to get bagels and made anyone eggs that wanted them. I had a lox in my eggs and it was very good. While waiting to eat I decided to call my father to find out how much snow we got at home. As I previously noted in part one, when we left we were only supposed to get 3-5 inches. My father answered the phone with the following:

We got at least 9 inches!

I thought he was kidding and did not believe him. UGH! Now what were we supposed to do? There was no way that our neighbors should shovel what we later found out was 11 inches of heavy, wet snow. I made a bunch of calls to neighbors, my father, and our friends to try to find someone to plow us out. JL then decided to call his boss. He owns several rental properties near us. He called us back as I was still in the process of calling people. He said he would plow us out. The nicest part – he said there was no charge! Thanks to him and our neighbor’s doing the walkway and sidewalk we were in good shape. The problem – storm two was heading their way AGAIN with 3-5 more inches the next day. YUCK!!!!

Once this was taken care of we all took turns showering and eventually made it out to lunch. JL and I insisted that we have lunch at the amazing Greek restaurant that is located there. We have no good Greek places here that are close enough with good parking, so this is very important to us. We had an amazing lunch and took leftovers back for the next day. After this we stopped back at the house quickly to put food away and head over to Radio Shack and Trader Joe’s again. Yes, we had to head there again. I wanted to get some gifts for people that were helping us out with the snow removal.

Next we decided to head back home for a little while before going to Chuck E Cheese (wanted to change diapers and nurse JSL). NHL wanted to take Bubbe and Grandpa there to play. We were not too sure about this since he has been very skittish there in the past (thanks to the costumes). Unfortunately, he did not do well this time. We used a coupon and had 100 tokens and barely used any. NHL was very upset that this Chuck E Cheese was not the same as the one at home. *sigh*  He started to flip out quickly and we finally left. Here are some photos from the few things that we did while there.

After we got back from Chuck E Cheese JSL fell asleep from all of the fun and excitement. Not to worry it did not last long. Soon after this he was up and eating dinner with everyone else. 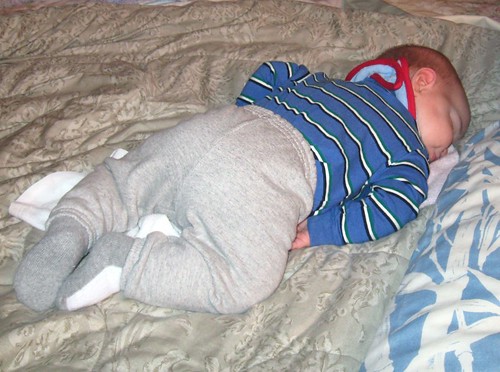 After the "fun" at Chuck E Cheese we went back home and ordered Chinese Food for New Years Eve. My in-law’s friend  S came over and once the kids were in bed we started to watch a movie. JL and I were left at about 11:00 and we were not able to finish the movie. JSL kept waking up crying. The poor little guy just could not catch a break.

JL and I watched the ball drop and then we were up for a while after taking care of JSL and listening to illegal fireworks that were shaking the house.