Tuesday morning we were told begged asked to let Bubbe and Grandpa sleep in to at least 9. Both boys slept a little later than normal (so 7-ish or so). JSL nursed and then we all went to watch television and check e-mail and things on the computer in the room NHL was sleeping in.

JSL was really tired from being very restless all night  (teething is evil I tell you). He and I went back to rest for a little while. When we got back up everyone was getting ready for breakfast. Bubbe was making pancakes for everyone. JSL was content at first just eating his Gerber Graduate Wagon Wheels and things: 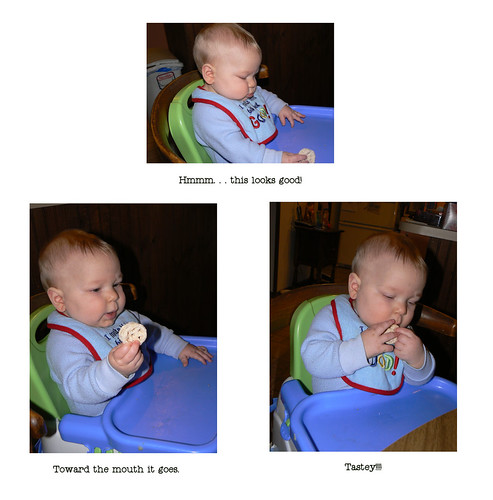 This did not last. Soon after this JSL was very vocal about wanting more. JL and I decided trying pancake in small pieces could not hurt. He had a few bites of JL’s and LOVED it. He was quite upset when it was all gone. Bubbe was great and whipped up another batch so JSL could have his own. The little monkey ate the entire thing. Here is a study of JSL eating his first pancake: 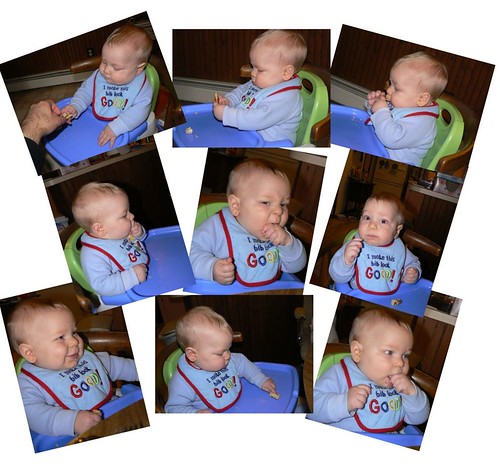 After pancake time we all got dressed. Here is JSL learning how to be a boy with JL: 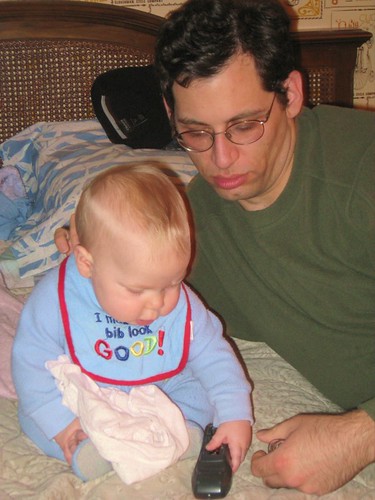 We were all pretty tired and decided to stay in during the day. JL working on my father-in-laws computer and the boys and I just played and rested. Lunch was left over Greek and Chinese – very fun combo.

Then at about 3:30 JL’s friend and his fiance came over to visit for a little while. G & L have been engaged for quite some time. Just before we left an envelope was in our mailbox from them. We had already received a holiday card, so I guessed maybe it was a wedding invitation. Sure enough it was. However, this was not just a wedding invitation, it was amazing. All 4 of us were invited to be their guests for a week long event around their wedding in SC late this year and it included transportation and accommodations!!!

We had to congratulate them, thank them and ask some questions. JL and I both wanted to make sure they were positive about the kids coming. They said they were. We found out from talking with them that there are only 30 or so people invited to this destination wedding. We were beyond honored. G later e-mailed JL and said he forgot to ask him a question. He wanted JL to be in the wedding party. G was JL’s best man in our wedding. There are a ton of things going on with the wedding. The actual ceremony is going to be early in the day on Halloween. We just have to figure out how many days we will be going for, but we are going to be there for G & L on their special day.

When G & L left it was time to think about dinner. JSL was attacking me for milk, so we went to nurse in another room. This is the result: 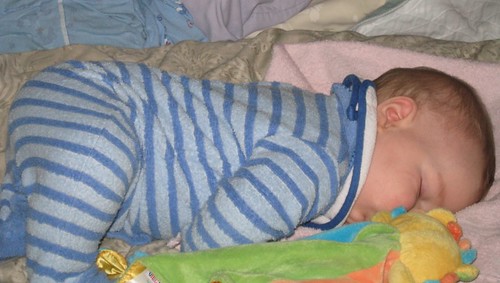 My mother-in-law was making her delicious chicken cutlets, lentil/tomato soup, potato kugel, and challah. Everything was delicious! Soon after this the boys went to sleep and we said goodbye and thank you to my father-in-law (he had to leave VERY early for work).

The next morning we woke up and I started to pack our things up. To complicate matters it was snowing outside, but nothing to even coat the ground. My thought was to get on the road at 10:00 to avoid rush hour traffic. This did not happen. We finally hit the road at 11:00. We made great time to the halfway point in our trip. Stopping to stretch and check out a store  (Disney Store) at the outlets there was good, but man it was windy. Rather than eat lunch there, we went over to Pizza Uno nearby. BIG MISTAKE!! We were finally back on the road two hours after we stopped.

Driving was not bad, we made great time and pulled up to our house to see there was no way we could get into the driveway. After we were plowed out from the initial storm, another 4-5 inches of snow fell and the city had plowed us in. JL got out and helped to get a path to head in.

All-in-all it was a very nice visit with Bubbe and Grandpa. I never had an allergic reaction to their dog Lacey, which is a first. A few things were said that bothered me, but such is life. JSL never wanted to be held by them much thanks to being so grumpy from teething, plus he has only seen them 4 other times (when he was born, his bris, NHL’s B-day, and Great-grandma’s B-day).

Sorry this took so long to finish. I was busy trying out a new photo editing program. I used it to make the collages up above.