Yesterday morning every single school in the area was closed thanks to the 3-4 inches of snow that we received topped off with an icy mess. During the morning commute freezing rain was making for an even more treacherous drive in to work for hubby. NHL was home from school, so it was going to be an interesting day with both of the kids trapped inside thanks to the freezing rain and ice.

To make things even more "fun" JSL woke up and his eye was completely glued shut. Not a good sign after using antibiotic drops for almost two days. In addition to this I mentioned to JL that his face was puffy. Sure enough, not only were his upper and lower eyelids red and puffy, but his cheeks that are already big, was horribly distorted on that side of his face. The picture below shows how he can not open his right eye entirely and you can see the puffy cheek. At this point the redness was not as intense as it eventually got and the flash washed it out a lot. 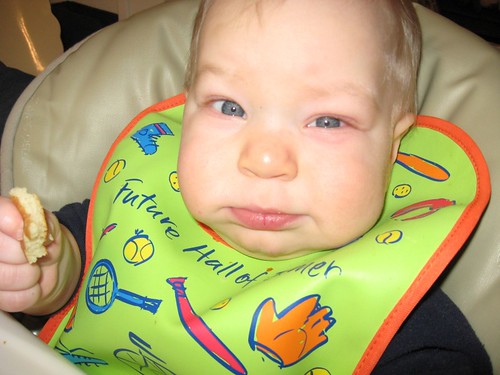 I freaked out and immediately called the doctor’s office at 8:00. After that I called the pharmacy to see about an allergic reaction response to the drops. I was curious about this since I am allergic to that family of medicines. They told me to stop and wait until I heard back from the doctor. At 11:00 (yes, you read that right) the nurse from the doctor’s office called me. She basically said that JSL had to be seen. Ice or not they were very concerned. I took a 3:00 appointment and called hubby with the news. There was no way I could clean off my icy car, and the house with a clingy 9 month old and 4 year old in  the house with me.

This is what the hockey rink outside of my house looked like. 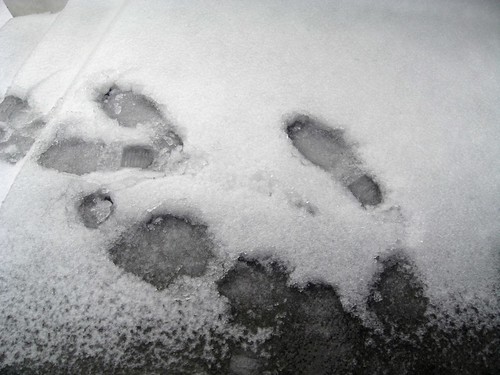 I nearly fell just trying to stick my nose out the door to take the photos. This is the tree right outside the door. Many other trees came down thanks to the icy . . . along with power lines galore. 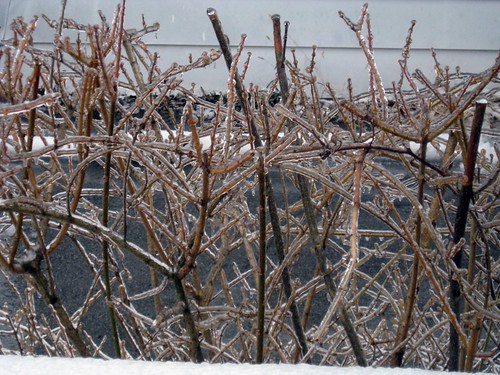 Another look at the walkway an hour or so after JL left for work. 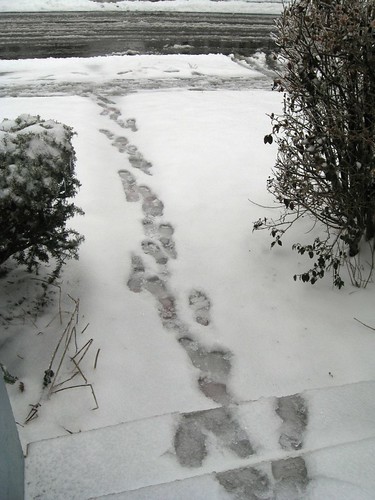 NHL enjoyed lounging on the couch in the morning, but was jealous that Mommy was with the baby most of the time. 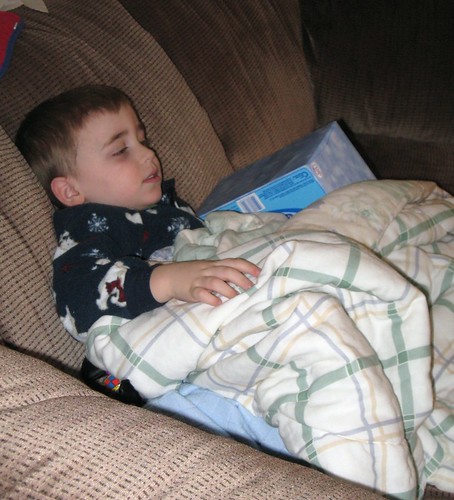 JL took a half day off and met me home at about 1:00. We left our house at 2:00 after I broke my car out from under the ice. When we got to the doctor’s office his eye was performing nicely. I have NEVER in my life seen an eye ooze so much green nastiness. Mind you as a mommy of a 4 year old and a teacher, I have seen a lot of pinkeye. While there we also noticed that tooth #7 has officially cut and is moving up in the world rather nicely.  When the PA came in and said he had a really nasty case of pinkeye and thankfully he did not believe it was anything worse. He told us that the eye is draining into his cheek and causing the swelling. Basically JSL gets a beautiful first case of pinkeye at 9 months old. He changed the prescription to a different antibiotic, only this time I have to pry open his eye for an ointment four times a day for the next week. We also canceled his well baby visit for today and rescheduled for two weeks from now.

After picking up the baby’s new medicine we went home. As we were on the street before ours we saw that a firetruck was blocking the road. We went around another way and saw there were a lot of people there. Then we saw that the traffic light was out. Ugh, not a good sign at all.

Sure enough when I went inside to check we had no power. I grabbed a few things and checked in with my parents. They had power, so we went to crash there. Our sweet neighbor was kind enough to agree to call us when we got power back so we could try to avoid darkness, cold and candles with the boys. At 7:20 she finally called and we were on our way home with two very tired boys.

After the boys were in bed JL and I exchanged Valentine’s Day gifts early. Tonight we are going to my parent’s house for dinner since Aunt M, Cousin S, and M’s mother are in town (someone always has something when we see Aunt M and Uncle I).

JL gave me a Whirley Pop and a great knitting bag (thanks to Laura for helping him with that). I can not wait to use both of them. Hmmm. . . popcorn when knitting sounds yummy!

I bought JL some dark chocolate and Cooking Mama Cook Off for the Wii. He enjoyed it when we rented it, so I thought it would be nice for our chef to have.

Later the boys will get their gifts, as will Cousin S.