The weekend began early here in AngelLand. Friday we woke up to reports of a horrible ice storm starting just around the time I would need to pick NHL up from school. I opted to keep him home and let him rest. So NHL, JSL and I had a fun filled PJ day and stayed out of the icy mess. In addition to watching Noggin, NHL spent part of the day showing me how to use certain games on his Smart Cycle. Here are some photos from when he was pedaling up a storm. 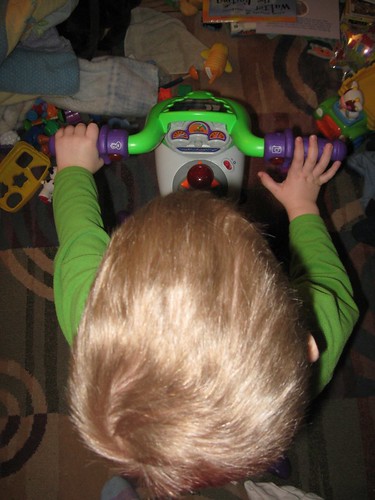 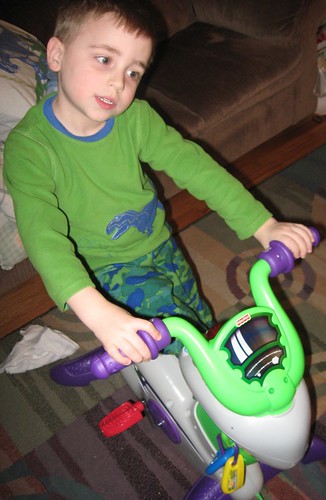 After several photos were taken I received the following response from NHL: 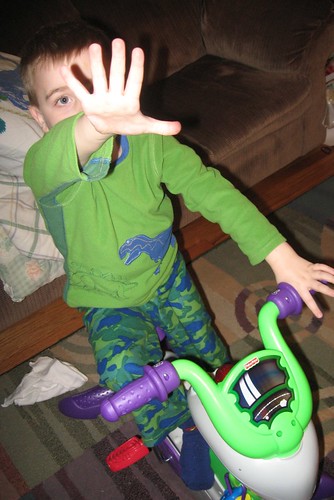 Friday night both of the boys were tired and went to bed early. Here they are when they were actually sleeping in their own beds. *sigh* Unfortunately it was a long night with both of them up several times. 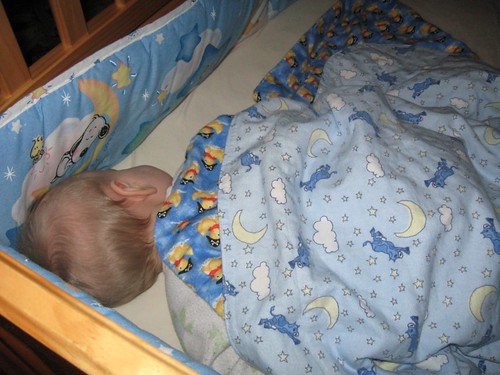 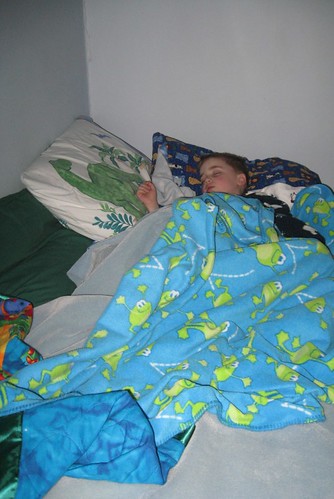 Saturday morning JL and I were walking, talking zombies! At around noon my parents called. They wanted to see if the boys would like to spend the afternoon with them. This way JL and I could head out to lunch and shop alone. Of course we jumped at this chance and got the troops ready to head out. JL and I had a yummy lunch at Panera (with a gift card I had) and then went shopping at Super Walmart. We needed some items that only they carried. We picked up a huge Rubbermaid tub to put our meat pots away in since we use them less than once a week. I also bought some more cotton yarn and also bought some flannel for new pillow cases for our bed.   (Thanks again Mom & Dad!)

When we were done we brought our things home and went back to my parents house. Both boys devoured lunch, but JSL apparently would not take a bottle. He played with it, but refused it and attacked my  chest upon return. So I think I will buy a Nubby sippy cup to have him try for emergency situations when I am not there to nurse. After JSL nursed we went with my parents to walk around the mall. The boys were getting very tired so we went to get NHL dinner on the way home. He ate and went to bed. Thankfully both of the boys slept through the night Saturday. While they were in bed I finished up my second washcloth. This is the one for NHL.

NHL was shocked to see it was done when he woke up early Sunday morning. We all were up at that point and had breakfast. JSL fell back asleep. This changed the plans. He slept and then we all went to Michaels for NHL to select yarn. After seeing JSL’s scarf he wanted me to make him one as well. I wanted him to pick it out since he is old enough. We got the yarn and then went running all over the place on errands. We had lunch out (kids eat free Sunday at Moe’s) and bought a Crock Pot at Kohls at over 50% off to replace our parve one that kicked the bucket. We then came home so I could nurse JSL.

While nursing JSL I noticed blood on his face. I mentioned it to JL and then realized I was the one bleeding. Lucky me, I had a blister from a certain teething monkey in a rather sensitive location for a nursing mother. the blister finally cut open. This was painful by the end of the evening so I put something on it and hoped it would help (it is much better this morning).

JL then went out with JSL for a little while. NHL did not want to leave and stayed home with me. He played with Play Doh and I played with yarn! I had to figure out how many stitches to cast on for his camouflage scarf. It took me two tries, but I finally got it right. This is NHL having a blast with Play Doh time: 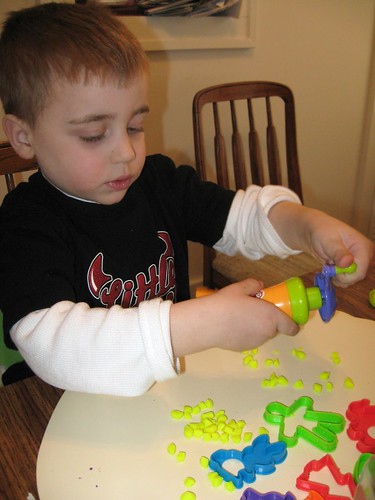 A closer look at this fun: 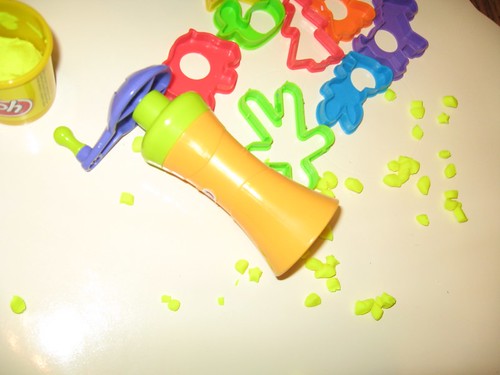 JL spent a lot of time chopping veggies up, making pizza and things for the Super Bowl. The funny thing is we hardly watched any of the game or commercials. We did tune in at the end just in time to see the Giants win – we were floored! Should make for an interesting training camp for the team this summer.

When both of the boys were in bed we worked on moving the meat pots out of the kitchen and I did some knitting. Here is what NHL selected as presented by a special Muppet and the progress from yesterday: 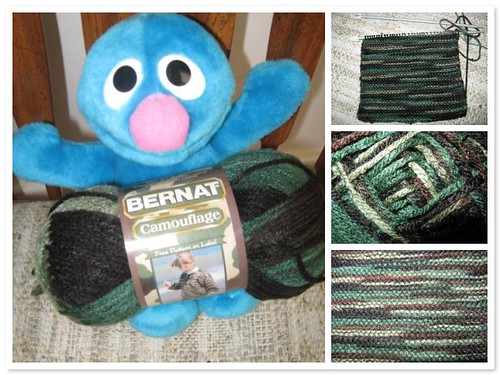 So far I am pretty impressed with how the camouflage pattern is working out. I was not too sure how it would look. I did about 6 1/2 inches and then went to bed. Then the wake up calls began. NHL was up at 2-ish and woke up JSL. JSL would not resettle and NHL wanted one of us with him. I was asked to go with NHL (his request) and JL had JSL in our bed. It was a long evening that ended with JL ignoring the alarm for an HOUR and then all of us rushing.

On that note I am off to do some organizing and purging of things while JSL sleeps.

I hope everyone else had a wonderful weekend whether or not you watched the Super Bowl.

« 1st Blogoversary Giveaway Winner
An Election of Many Firsts »