Did you miss me?  What? You did not even know I was away – sheesh! I guess I will have to try harder next time.

This weekend we had two nephew birthday parties together. JL and I were antsy about doing 5-6 hours of driving in one day with the boys. We toyed with staying at a hotel and making it a mini-vacation of sorts. Finally we decided Friday night to do it if NHL and JSL had a good night.

Saturday morning we got up and I packed everything up for the trip. We left the house with no reservations for a specific hotel. The hotel of choice was known and we had directions. On the way there we stopped about 45 minutes away at some outlets for lunch, potty break and retail therapy. I had a nice time at the HUGE Carters sale. Bought two things for JSL for next winter and had to purchase some girlie items for my only niece S. About two hours later we were back on the road.

We made it to the hotel of choice and I went in with the road saver coupon. I waited and waited for someone to come to the front desk – NADA. Finally I took out my cell phone, got the number and called. Suddenly a woman appeared and I hung up the phone and told her it was me calling since I had been out there for some time. No apology – nothing. This should have been my first clue. I asked about a room and showed her my coupon. She told me they were at 80% capacity and no honoring the coupon. WHAT? I questioned her and she got quite snippy.  I still do not understand why she would refuse a person a room over such a little amount of money to them. After all it was 4:30 and I doubt they would get a lot of people after that.

Rather than take a room I went out to the car to talk with JL. Apparently he thought I was joking about them not giving us the rate and took the kids out to go in. Finally I was able to get his attention and we went to the car to call two other hotels that were in the area. The first was a no go since their pool was being fixed. So I called the hotel that was directly across the street. They were wonderful on the telephone so we went right over. They were even better in person. We quickly were able to get a room for the coupon rate and this room also included a complimentary breakfast. Oh and important to NHL – they had a pool!

We gathered our things and went up to the room. We did a few things (diaper change and nursing were a must) and called JL’s sister. We were invited to their house and she suggested going out to dinner together. So we went there for a little while to let the boys play and then went to a diner right near their house.

At the end of the meal Cousin A and NHL split a sundae. Here is NHL eating his and he even shared a bite with JSL: 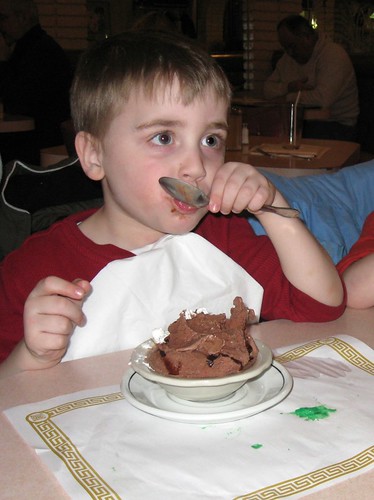 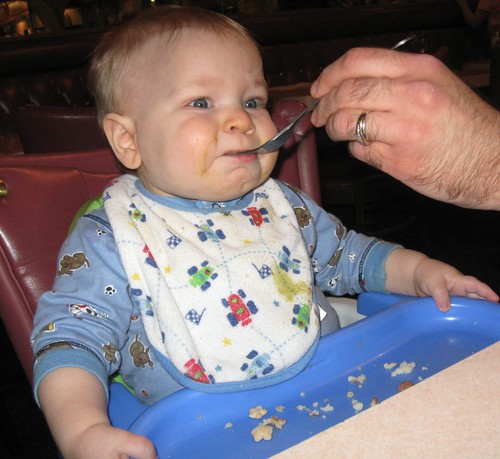 We toyed with going to Trader Joe’s after this, but it was late and the boys were really tired. So we went back to the hotel. On the way in I asked them a question about our room. I had noticed a ladybug and was curious if there was an issue. She said in some rooms. So we went up hoping it was not in ours. Unfortunately we soon found out ours had an issue and we caught several and had others swarming at the lights before bed.

In the room we quickly set up the sofa bed for NHL. He was quite excited about sleeping in it alone. Although he fell asleep quickly the poor kiddo had a rough night. He woke up at about 2:00 asking to go home because he missed his bed. Awwwww! JL was sweet and climbed into the rough looking bed with him. Here is NHL before falling asleep and later on when he was in it alone. 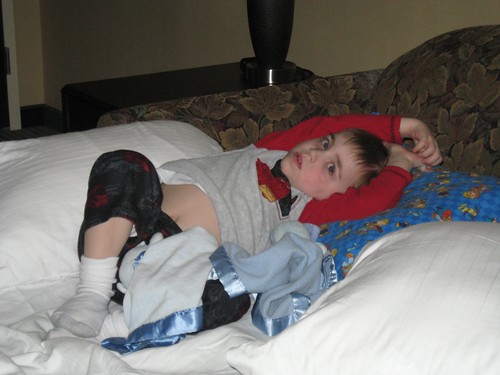 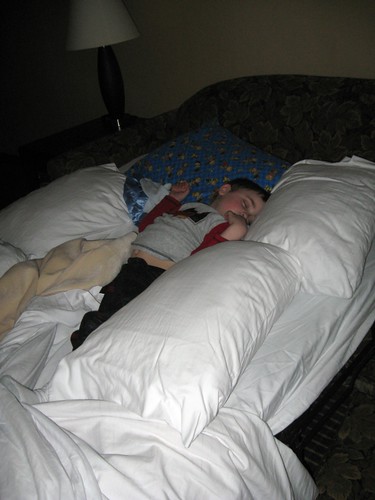 Next it was time to get JSL ready to bunk with us in our king sized bed. He was so tired, but wanted to play on the big bed. JL helped to get him ready with me. 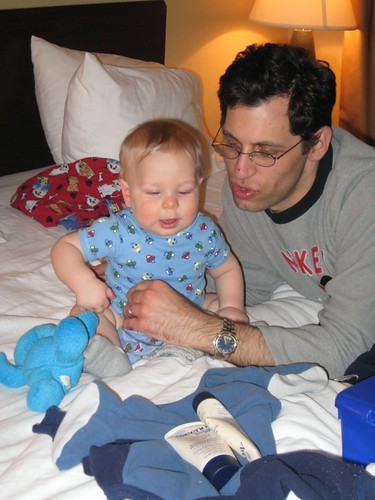 JSL quickly fell asleep, along with his Daddy. One stayed in a single spot, the other rolled all over the bed. As you can see while all of the boys were sleeping, I took advantage of the quiet time to knit. As I watched for ladybugs I was knitting a dragonfly cloth. 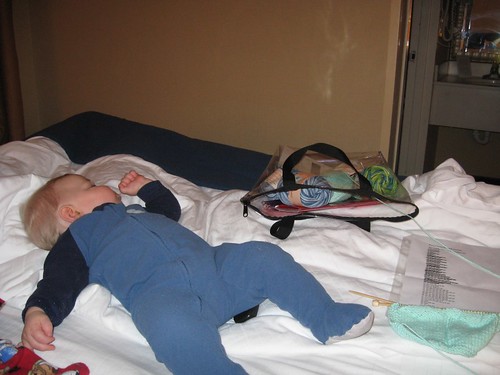 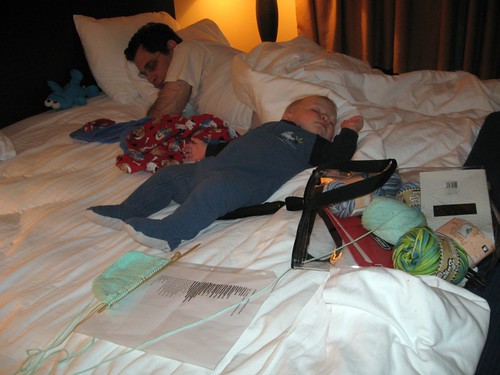 Soon after this I turned off Saturday Night Live (one can only handle so many Spitzer jokes) and went to sleep with visions and feelings of ladybugs crawling on my head.