Please cue up the song "Be Like a Duck" by Sandra Boynton from Philadelphia Chickens!

This is the song that Nana, NHL, JSL and I were singing on our way home from BJ’s this afternoon.

Nana had the day off and watched JSL this morning when I went to take NHL to school and a doctor appointment. We all went to pick NHL up from school. We decided to go to BJ’s to get a few things. After we had checked out we heard what sounded like a herd of wild beasts on the roof. When we got to the door we knew it was not good.

The sky had opened up and the entire parking lot was a lake. The rain was coming down so heavy it was unreal. My mother and I decided to let NHL finish eating a pretzel. Then she got another box to put everything into and we decided to make a run for the car. I went first with JSL in his stroller.

Before I was even half way to my car I was soaked. Poor JSL was being sprayed and was crying. Finally we arrived at the car and I had puddles of water pouring off my head. JSL was now laughing as we were in the car. As I was putting the stroller away Nana and NHL arrived at the car. I put NHL in his seat while my mother loaded the boxes in. Then we all were in the car.

Imagine two adults, an almost 5 year old and a 14 month old sopping wet and laughing hysterically. That would have been us. As we drove home my mother was trying to get the boys to quack since we felt like ducks all wet. I decided to be a sport and put on "Be Like a Duck" and we quacked all the way home, carefully maneuvering by flooded roads.

We managed to make it back to my parent’s house and went back through the rain. Once inside we decided that we had to strip everyone of their soaking wet clothing. JSL had a spare outfit. I found a long t-shirt to wear as a dress that had been left in my old room. NHL had some clothes that were in the car and I was not going back out so I found an XL t-shirt that I had never worn and put it on him. 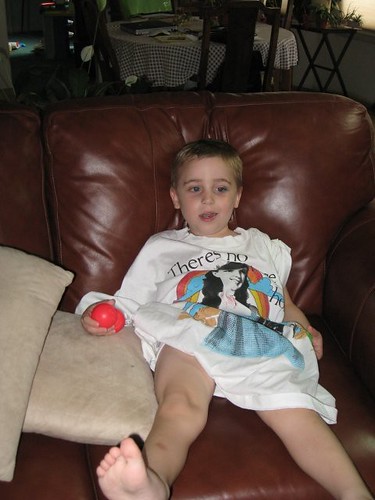 We are finally back home now and I cringe at going to the basement. JL went down there this morning and we had water come up again after the night. I can only imagine how horrible it will be now thanks to the last downpour.

This weekend we HAVE to buy a new dehumidifier – any suggestions out there? Our LG one did not last very long, so I doubt I would invest in that again.

We started using a pom-pom behavior/reward system with NHL. We changed it up from last time when he had to fill a container. This time it is a lot more interactive for him. One of the items that helps him to receive pom-poms is the mandatory afternoon rest time. His "job" is to go into the boys room and rest on his bed. If he is in there JSL will calm down and rest on his pillow after 5 minutes or so. The result is a napping baby, proud big boy and relieved mommy. 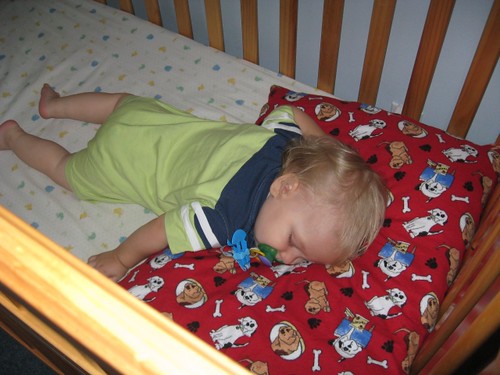 Now I am off to sulk about a lost post that I started writing yesterday on a serious topic. I am so ticked off that it only saved the title and nothing else that I had written. Oh well, I will have to redo it again in the future when I calm down about it.