When you become a parent, you learn how to go with the flow a lot more. Heck, you also learn how to function (or so they say) with little or no sleep. This weekend would be a great example of that.

Friday we were supposed to leave after JL arrived home from work to travel five hours to see my brother, SIL, and niece S for a first birthday party weekend. My parents left earlier in the day and told me that the rain was horrible going in the direction. By the time JL was home from work it was 3:40 in the afternoon. We knew that by the time we finished packing, loading the car and kids to head out it would be 4:30-5:00 at best. That means with a stop to eat we would not arrive at our destination until 10:00 at best. Add the weather and kids into the travel and it would likely be later.

We quickly looked at the radar of weather conditions for the evening. It looked miserable. The rain showed no end and was quite heavy in the direction we were going in. We changed our plans. Rather than leave at night we would get up VERY early and load the sleeping boys into the car and go before the sun was up.

Dinner was made, a quick errand and everyone went to sleep early. I set the alarm for 3:00 and hoped to be on the road at 4:00. NHL was up at 2:00 and hardly went back to sleep after that. I moved the alarm to 4:00. Since it was shabbat I was doing all of the driving and wanted a little extra sleep. At 4:00 I quickly packed the rest of the items, both boys were up (GAH) and we hauled everything into the car. We were on the road by 5:00 heading to see Uncle I, Aunt M, and Cousin S.

Do you prefer getting up early to drive or doing the trip at night?  Although I was exhausted and the sun was not out and there was thick fog, it was smooth sailing at this hour of day. I was pretty much the only car on the road with all of the big trucks. We made it to our destination in just under 5 hours including a stop at Dunkin Donuts for breakfast and a pit stop.

Once we were there the kids quickly started to play. Here is Uncle I reading all of the kiddos a story. 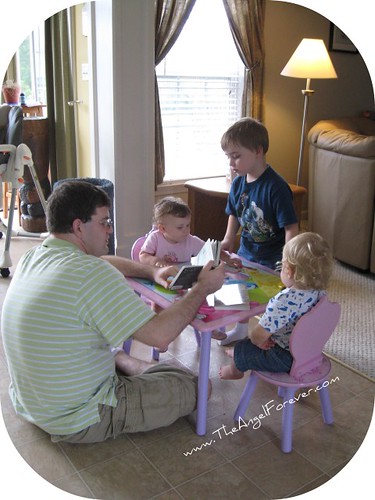 We had a fabulous weekend spending lots of time with family. The kids enjoyed playing with Cousin S and did not want to leave yesterday afternoon. We arrived home late last night. JL and I were exhausted from little sleep. This is what we hope to catch up on soon. 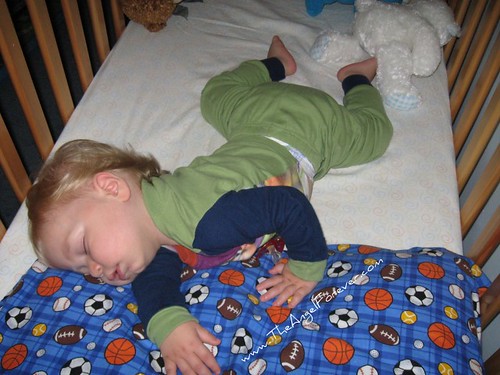 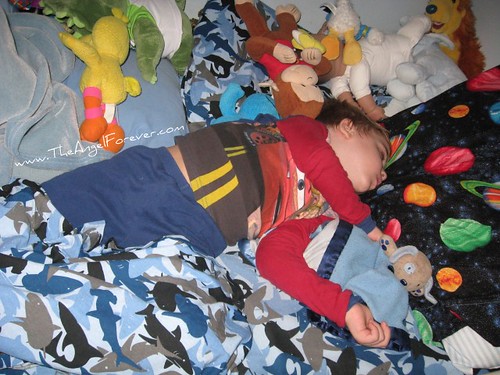 « A whole lot of rides going on
Toddling Times »