A snowy birthday to remember

Each of us probably has a birthday that we will always remember. I have several of those from my childhood, when I first met TechyDad and as a mother. Yesterday, I added another memorable one into the group.

As if turning another year older is not enough, add being sick. My Neti Pot and I became very good friends by the end of the day. I was up most of the night not feeling well. Poor TechyDad was up with me and felt lousy in the morning. He had a headache and sore throat. He called in sick to rest up and try to feel better. Then there was the snow. The reminder of winter and the frigid months that are ahead came back fast and furious. The 1-2 inches turned into at least 5-6 inches of very heavy/wet snow.

NHL’s school was closed, along with pretty much every other school in the area and beyond. The two little guys were anxious to get outside. Too bad TechyDad and I were not feeling as excited about it thanks to illness. To delay going out TechyDad got the boys to give me my birthday presents. The boys gave me a Snuggie since I am always freezing in our house as we attempt to save the planet and cut costs. TechyDad had already bought me the "Forget Me-Knot" charm for my Pandora bracelet. In addition to this, he gave me a subscription to Picnik Premium. I had been toying with this for a while, but he splurged and now I get to play.

After breakfast, we found all of the snow gear so the boys went out. TechyDad focused his attention on the roof. He raked the snow to try to avoid the ice damn issues of the past few years. 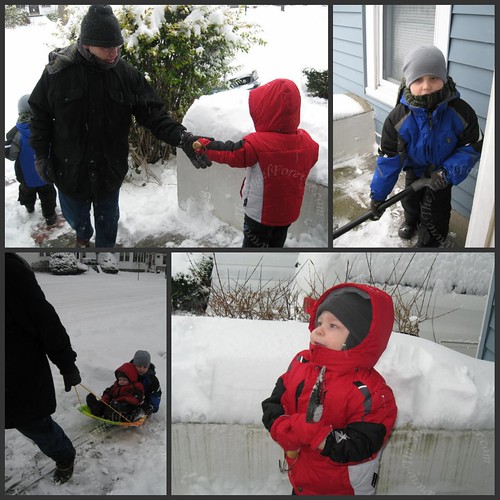 When the boys came in, they were soggy and cold. So hot chocolate came out and then it was time for lunch. Eventually, TechyDad figured it was best to get our cars out from under the snow. NHL went outside to help Daddy. Meanwhile the little guy and I set out to bake a cake. We had planned on going out for a nice birthday dinner and then to have cake with my parents. Since I felt awful and so did hubby, we asked for a raincheck. 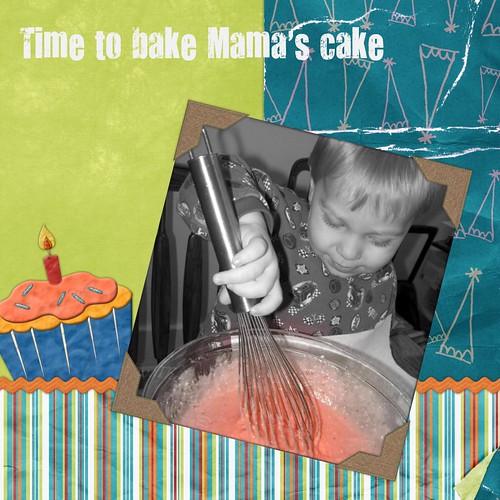 While the cake was baking, I heard a scream of "Oh no!" come from outside the window by my laptop. I looked outside and saw TechyDad grab NHL and scream to me to come to the door quickly. I ran and grabbed tissues expecting something to be bleeding. By this point, NHL was howling in pain. The boys were digging out the driveway together. NHL walked in front of hubby as he was looking down. TechyDad did not know he was back there and lifted up a big shovel of snow just as NHL bent down. The shovel got NHL right on the outside edge of his eyebrow.

When they arrived at the door, there was blood all over the place (faces are brutal like that). I grabbed more tissues (could not find gauze). We removed the pressure for an inspection. I could see there was a deep gash. Still in my PJ’s, I called my mother. She came to our rescue. While TechyDad finished getting his car uncovered, I got NHL ready to go to the ER. He was in a panic because of past stitches history (and removal). The boys picked up Nana on the way.

Long story short, they went to a new ER and it was a good experience. The people there were amazing and in the end NHL did not need stitches. They were able to use glue to put the skin back together. Now we just have to be careful to watch for an infection and to make sure it holds. We go back to the doctor on Monday for a check to see how things are going. 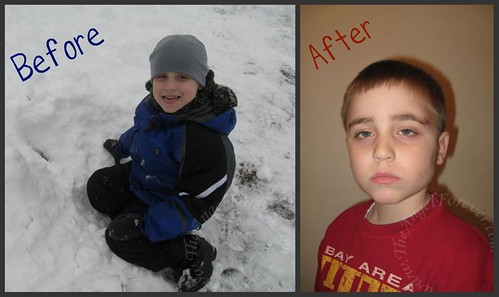 So after that eventful day, I used my Neti Pot (with an audience amazed to see the magical event) before bed and curled under my flannel sheets to bid adieu to my birthday for 2009.

P.S. TechyDad wrote about yesterday here. He has photos from the ER and of my cake right before we ate it.