Monday night, only two days after my cousin’s wedding the boys were still talking about the events of the weekend. The best was when NHL asked if we could go back to cousin RB’s wedding again. Both of the boys had a magical time dancing, singing, and enjoying the experience of a wedding. It was amazing watching NHL and JSL as they figured out just what a wedding was about. Sure, NHL had been to my brother’s wedding, but he was so sick that weekend.

Saturday, we arrived at the hotel several hours before the wedding. We went out to lunch nearby and stopped by the LL Bean outlet store where we scored a few items for great prices. Next, we stopped by Target to pick up a few cars for the boys to be able to keep them busy at the wedding. We goofed and forgot to pack any earlier that morning when we left the house. Then we went back to the room where I rested (sinus infection and antibiotics was kicking me in the butt) and the boys played quietly. Before we knew it, it was almost 4:00 and time to get everyone dressed.

Once we were all dressed, we went  to wait for Nana and Papa to go to the location of the wedding next door. When we went outside, the groom and our family were there. When it was almost time, we went inside. We were told to find our table number and we would sit there for the ceremony and the reception. My family rocked – they put us on the edge near an escape door. This was actually utilized as mentioned by TechyDad in his post that includes videos of the party boys. 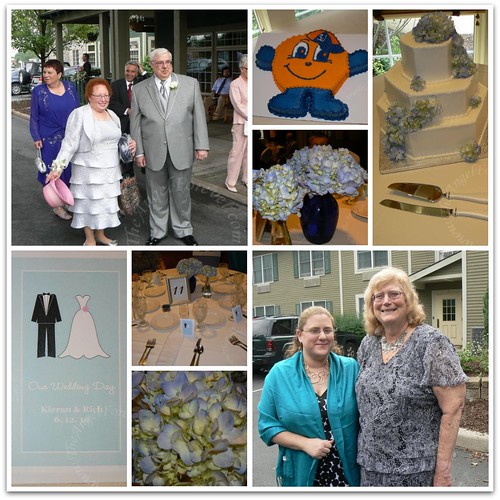 After the actual ceremony, the little guy came back in and the boys were happily snacking on food, playing with their cars, dancing and saying hello to everyone. The one and only photo that we tried to get of the four of us is below. Not the best since the kids were trying to run away. Oh well, better than nothing I suppose. 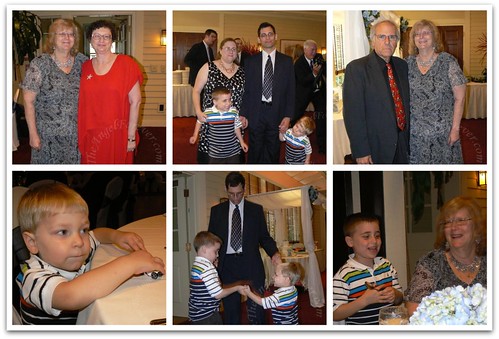 Of course, after JSL had a few crackers and some fruit, he immediately wanted the wedding cake. Try explaining to a three year old that you have to wait. Thanks to being seated VERY close to the cakes, we kept them next to us and never moved away from them. Not saying that we didn’t trust them, but the cakes certainly could have gotten them into trouble. Thank goodness there was no incident. The boys kept playing with their cars and dancing the night away. Even Nana and Papa were caught dancing. 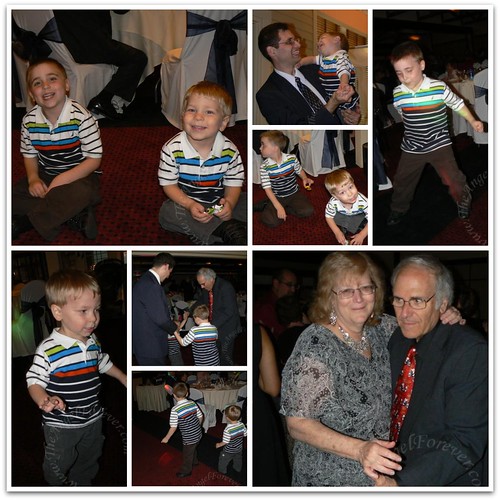 After a while, it was finally time for cousin RB and KB to cut into the cake. The boys were so excited to be up close and get to watch this. NHL was especially fascinated with the bride and groom and kept asking about them. Then, when it was time to eat the cake, both boys were more interested in the music and everything else going on. 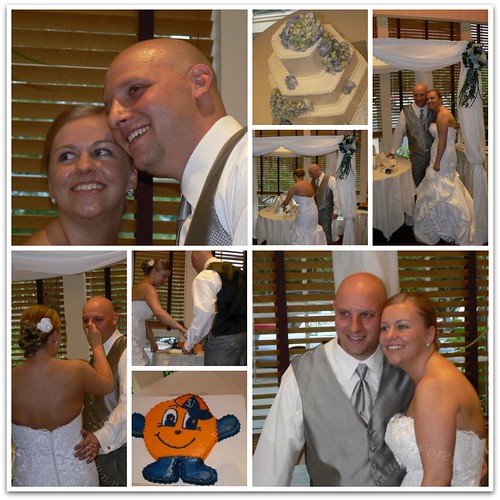 Several hours after their bed time, NHL finally looked at me and said he wanted to go back to the room to sleep. JSL was reluctant, but eventually did not want to stay without his big brother. We got back to the room and NHL curled up to sleep within seconds of his head hitting the pillow.

If you have kids, have they been to a wedding and did they have fun?

As you can tell, my boys had a blast and want to go to another wedding soon! More wedding photos and stories coming later on. Wanted to share some of the memories that we had from this fun family event. Mazel tov again to Cousin RB and KB on their marriage!