If you have never been cherry picking, I urge you to go. Even if you are not a fan of cherries, the experience is well worth it. Two years ago, we went cherry picking with my brother and his family. When we tried to go last year, it did not work out. The crop was late and we were out of luck. This year, we watched carefully and planned the weekend to go.

Two years ago, we had four adults, an almost five year old, just one year old and 10 month old with us. This time we had six adults (Nana and Papa joined us), an almost seven year old, just three year old, almost three year old and four and a half month old. Having two extra adults was a blessing. This year, we went to a new pick your own cherry location called Singer Farms. Our first impression was not the best thanks to too many people swarming and too little parking. After we got over trying to find a spot in weeds that were taller than our little car, we got situated. JSL was sleeping after the pre-cherry picking fiasco and so was the baby. Everyone else went over to get buckets to collect cherries. 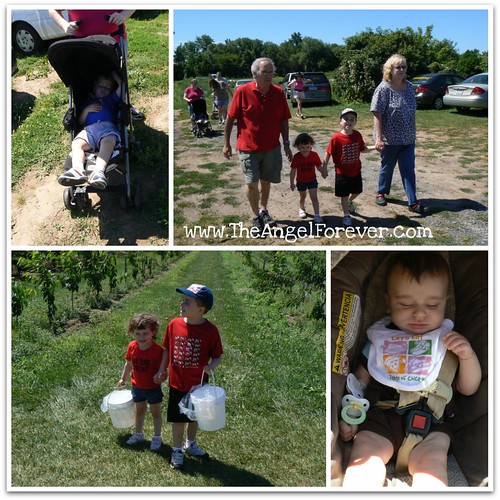 When we got to the orchard, it was amazing. The trees were overloaded with tons of cherries. For as far as the eye could see, there were trees filled with different types of cherries. We stuck with the sweet cherries. As we were getting settled, JSL woke up and joined the picking crew. Nana helped the little kids some, but was also in charge of pushing sleeping BA around in his stroller. 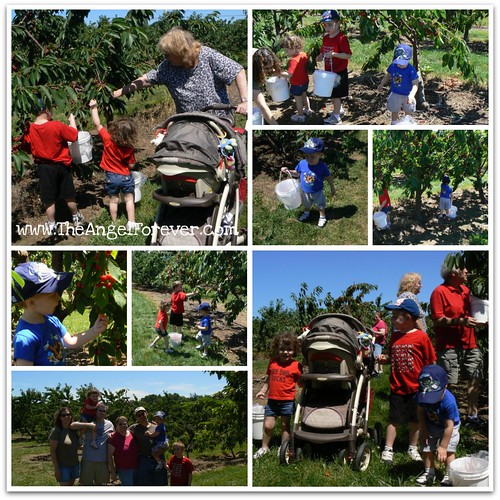 The cherries were absolutely amazing. Each time we were ready to stop, more sucked us in. It was like ADD of the cherry kind "Oh look . . . pretty cherry!" Finally, after just under an hour, we decided that we had more than enough to feed all of us and many others. We carried our precious cargo back to get weighed so we could pay for them. 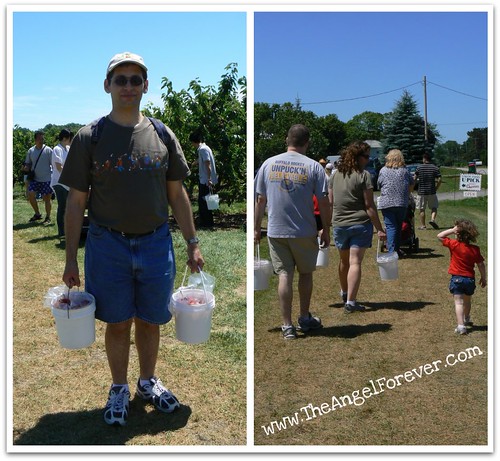 We mainly picked two kinds of sweet cherries. One was similar to a bing (or may have been) and the other looked like a rainer cherry. Those were definitely a fan favorite. They have a yellow hue to them and when you bite inside the flesh is light colored. The interesting part, they taste like a peach – without the annoying fuzz outside.

If you read my Tweets from our adventure, you know how many pounds we had. If not, what do you think? 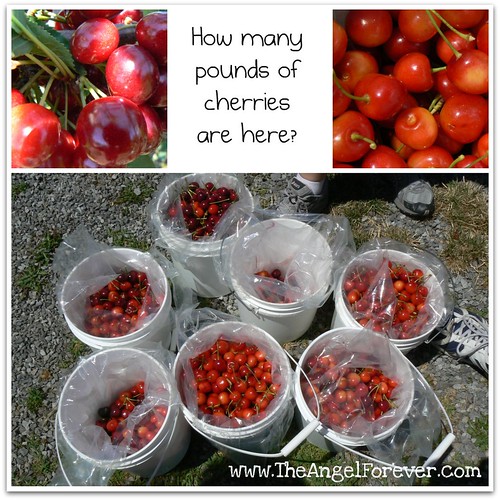 I will end the suspense. We picked 33 pounds of cherry goodness. That beat our record of just over 22 pounds! We ate a lot of them Saturday throughout the day and Sunday morning. Then, we divided them up. We took about half of them home to share with others. Tonight, when the kids are in bed, there is a bowl of cherries with my name on it!

Thank you to Uncle I, Aunt M, Nana, Papa, SG and my boys for a wonderful experience with my extended family.