Hi, TechyDad here.  I’m guest-posting for today’s Tuesday Tales.  And here’s one of the tales:

Once upon a time, there was an alien who took his pet bee on an airplane.  They had received a post card from the alien’s good friend Bigfoot.  They tried to find Bigfoot’s home but turned in the wrong direction and got lost.  They looked all over and finally found the fountain in front of Bigfoot’s cave.  They were just in time for his birthday party.  The End.

No, this isn’t part of a great piece of literature.  This is a story that I just made up.  Don’t worry.  I’m not reviewing my own stories.  I’m reviewing *how* I made this story up.  I used nine small dice called Rory’s Story Cubes. 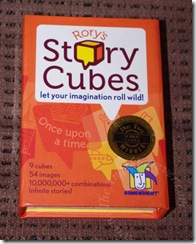 Each die in the set has six sides like a normal die.  Unlike normal die, though, there aren’t dots, but pictures.  The goal is to make a story using the pictures that come up when you roll the die.  You roll them all at once and try to come up with a story that fits.  Alternatively, you can work with other people, rolling one die at a time and taking turns adding on to the story.  Here is what I rolled that became the story above: 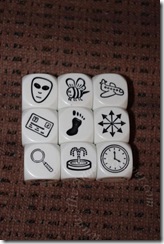 The genius here is that this prompts kids (and, let’s face it, grown ups) to exercise their imaginations.  Each roll of the dice results in a different set of images.  Since there are over 10 million possible combinations, you could play for years without repeating the same story twice.  Even if you rolled the same images twice, a simple shift in the order you put them in or interpretation of the images can drastically change the story.

This can also be used to help kids practice their writing.  As you saw above, my story wasn’t long.  Less than 70 words (and I purposefully lengthened it).  At this length, it shouldn’t intimidate early writers at all.  A child could think up their story and practice writing it out with no problem.  In fact, children might be more motivated to write their own stories than to write answers to questions or copy printed texts.

Since the use of these story cubes seems to be limited only by imagination, here’s a quick imagination exercise for all you readers.  Look at this Rory’s Story Cubes dice roll: 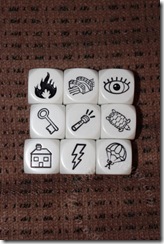 Now, what story can you make up using these pictures?  Leave your story in the comments below.  Let’s see how many different stories we can get from the same nine images.

Want to see and hear what NHL thought of Rory’s Story Cubes?  Head on over to TechyDad.com to see his video review.

Disclosure: Our son picked out Rory’s Story Cubes while shopping at a local book store. He thought they looked like fun and used a gift card that he had received for Passover to purchase it. All opinions are our own and no compensation was given. One widget within the review is for my Amazon Affiliate where I will receive a percentage of money for the sale  should you opt to buy Rory’s Story Cubes. Note from TheAngelForever – as a teacher this would be a great classroom gift to send to your child’s teacher.