A Duh Moment of the Teething Kind

Well, for once it was not from the lack of sleep from two little bed hogs boys taking turns being up ALL night. No, it was not from all four of us in our queen sized bed for several never ending long hours in the early morning. Nor does it have to do with fighting off a cold and not being able to take anything thanks to nursing. Nope, not one of these items mentioned is the reason I am feeling horrible and guilty.

This is from being a "dink" and not reading the signs and helping poor innocent JSL. I was just nursing him and he was really miserable. Something caught my eye in his mouth, so I fought with him to look inside.

Staring me in the face, on the top next to the two front top chompers, were little points on both sides just poking through. The poor baby has had signs the last week, but I was in denial since he just cut the other ones. Every single classic teething symptom that some doctors deny were there (thank goodness our dentist is a believer in them). He had the telltale gross "fun" diapers, rear end rash, restless at night, stuffy nose, excess saliva, didn’t want to eat solids, and was super clingy to me.

I should have known and not been in denial. I could have given the poor kid something to help him sleep at night instead of trying simple and useless binky therapy. At least I know now and can help him out and snuggle him if that is what he wants. I need to learn to savor these moments more: 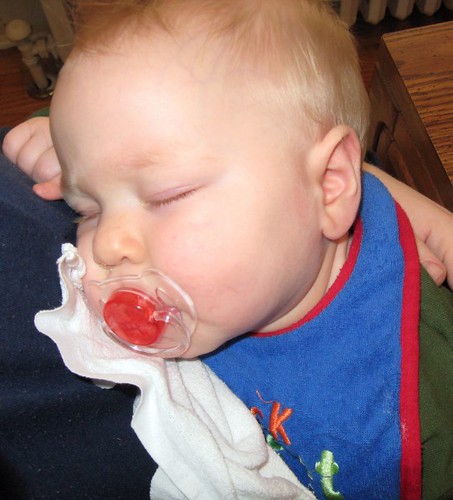