Friday night was rough. As previously mentioned the little guy is teething constantly again. JSL was fussing a lot during the night and I was in pain. I think I may have dislocated my shoulder. After getting up several time, JSL wound up in our bed. NHL woke up too early for us (his usual time though). I asked JL to take NHL to the other room to play or rest on the couch so I could nurse the baby and maybe he would go back to sleep.

The little guy was really miserable. He nursed a little and then wanted to settle. We were both in my queen sized bed and I forgot to move pillows on the other side since he was right next to me

Can you see where I am going here?

I must have fallen asleep and a certain 8 month old clearly did not. Next thing I know I heard a horrible THUD.

I shot up out of bed and immediately freaked out. I saw the baby was NOT with me in bed. Then instantly I heard him screaming from the floor. I screamed for JL who was sleeping on the couch. He came flying to the room and we picked JSL up to assess him.

I think he was more scared than anything about what had happened – all of the fuss and what not. Within 10-15 minutes he was not crying. Nope, the little monkey was creeping all over the bed after our remote, chatting with Daddy and sitting up to play.

I felt so guilty and like a horrible mommy. I called my mother who is out visiting my brother and his family. I flipped her out to the point that she had to put my niece down and was in tears (sorry Mom). This was obviously not the intention of my call and made me feel worse.Thankfully JSL seemed fine the rest of the day. He wanted to play, try cruising on the side of the couch (and he fell again), and chat up a storm.

With all of the excitement this morning we took naps this afternoon (Mommy forced NHL into his bed and stayed with him until we both conked out). Meanwhile JL cleaned up some as JSL slept in his highchair. He started to fuss some so they went to the couch together. A while later NHL woke up and went to the couch to find the other boys asleep. This is what happened next: 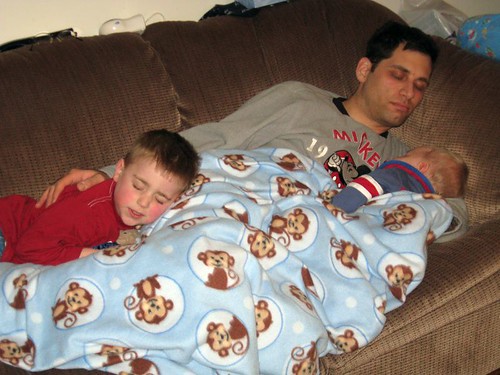 For a little boy that was not tired he wanted to cuddle right back up with Daddy and JSL. 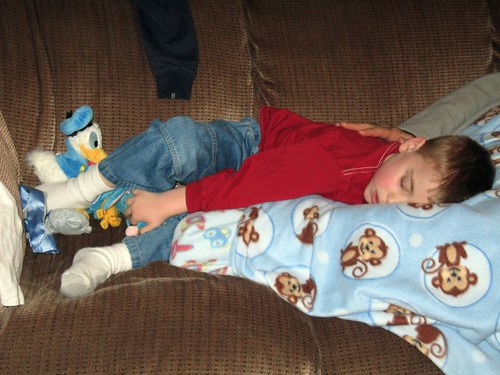 The following is the look I received after a few too many flashes of my camera. 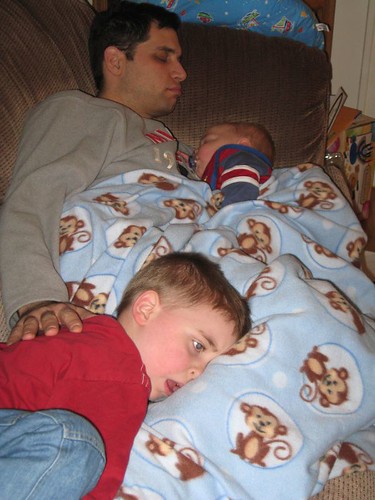 Soon everyone was up and much happier than before. 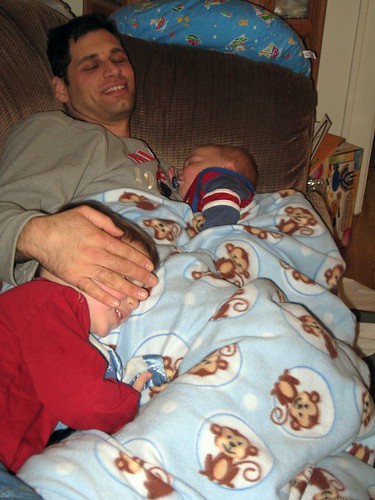 Soon after this Mommy went out for a girls night with my friend H. Her husband J went with JL and the boys out. More on this later :)  Now I must sleep since it is very late and no doubt one of the children will be up way too early.

« A Duh Moment of the Teething Kind
They used what with 3-5 year olds? »