Did you know that crawling can be hazardous to your health?

Man, I forgot how a baby with no fear in the world can quickly get into trouble with practically nothing in front of them, just trying to crawl.

This morning JSL was on the floor playing. He decided he was done sitting and wanted to move to get a toy. He moved his feet out and was attempting to get into crawl position. Thanks to his PJ’s he was having a hard time moving his one leg around. Next thing we knew – BOOM!

That was the sound of JSL’s eyebrow and forehead making contact with his cow truck. In moving his leg out he lost his balance and his arm went out and his head went down. He screamed bloody murder and within 10 minutes this is what the bruise looked like (not the best shot): 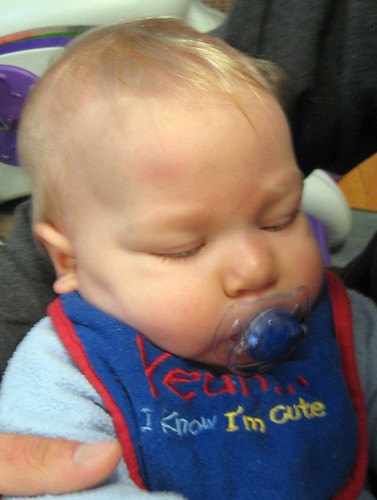 JL kept icing it to help the swelling to go down, but it looked horrible. We called Aunt M to ask her about things because NHL never had a goose egg like this (sorry we woke you up M). This kiddo is going to be a trouble maker. The poor kid is a mess thanks to this and tooth #7 coming in fast and furious.