Growing up with the Muppets, I remember playing my Muppet Show album on my old Fisher-Price record player. Actually, I think my father also had it on an old eight track as well. Man do I feel old and, with my birthday coming, this hurts even more. Anyway, I have always loved listening to the Muppets sing. 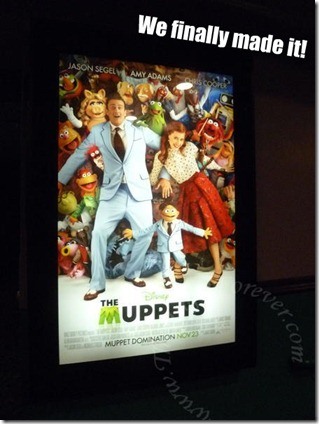 MP3. The boys have been listening to it a lot with him. I had not really had a chance to listen to it. So when we went yesterday to see The Muppets, I was not jumping in my seat and singing along like the boys. Of course, I fell in love with it as I watched the movie come to life.

To say that I enjoyed the movie would be an understatement. I will just say that I can NOT wait to buy it on DVD and watch it over and over again. More on the movie coming later. One of the items that I really liked about the movie was it was old-school Muppets. It brought us back to the days when the Muppets really did a lot of singing and dancing. The songs were classic and fun for all ages.

When I got home, I found a fun video on YouTube about the soundtrack. It is a bit longer, but worth it. They had a lot of fun mixing The Muppets and their humor with would be YouTube comments.

Yes, the Muppets are back and I thank Disney for making it right. I do think Jim Henson is smiling down watching the next generation of Muppet addicts like my children.