Cocktail Reception – Passport to the World

After arriving in Orlando for Disney Social Media Moms Celebration, we checked into the Yacht Club, registered, and immediately took advantage to the close proximity of Epcot. NHL and I stayed at Epcot a little while longer to have some special time together. In just a few short hours, I noted over 8,000 new steps on my pedometer. Yes, there is a lot of walking all over Walt Disney World.

As NHL and I walked  and then hitched a ride on a boat back to the Yacht Club, we chatted about the resorts and places we were passing by. I pointed out where TechyDad and I stayed for our honeymoon. NHL was fascinated with the Boardwalk. We also noticed more things unfolding on the beach where we would be gathering in a little while. 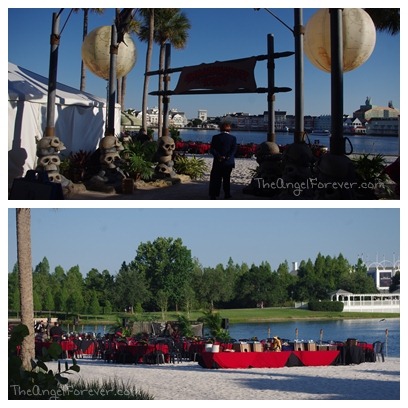 When we got back to the room, TechyDad and I quickly got ready to head out to the welcome reception in the convention center. Nana and Papa were in charge of getting the boys into their pirate party best and meeting us there later on.

TechyDad and I walked over with Shannan  and a few other people. We were among the first to arrive as they opened the doors. We were immediately greeted by a ukulele player and room that transported us to Hawaii. It was like we were at Aulani – a Disney Resort and Spa in Hawaii. As people arrived we walked around and saw many old friends and finally got to meet some new ones. There are too many people to name. My one regret – I hardly took photos of any people. 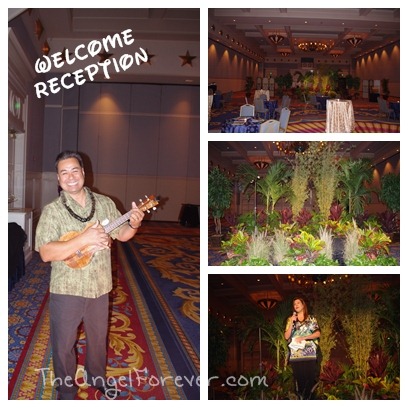 During this time another special event took place. Ellen presented Kelby with her new book – Pinterest For Dummies

. Disney was a magical destination to celebrate our friend the author! Be sure to check out the video of this fun moment that I am bummed I missed (walked over after it was finished).

Soon after this, Leanne took the stage to officially welcome everyone to the 2012 Disney Social Media Moms Celebration. From here, we learned more about the Aulani Resort and Spa in Hawaii. In addition to this, they shared that with Disney you may need a passport for other reasons than going to their resort in Paris, cruising, and beyond. Thanks to Adventures by Disney, you can experience locations throughout the world with a special Disney touch.

Adventures by Disney Brings History to Life with New Privately Guided Itineraries in 2012 — Launched in 2005, Adventures by Disney provides immersive, hassle-free and exhilarating guided family vacation experiences in Europe, the Americas, Africa, Asia and Australia. In 2012 guests will journey through Greece, Egypt and Northern France in an award-winning lineup of family-friendly group adventures.

Yes, one day I would love to go on an adventure with Disney that would require a passport and take me beyond World Showcase in Epcot. It would also be nice to head back to Hawaii again, to go on the Menehune Adventure Trail. 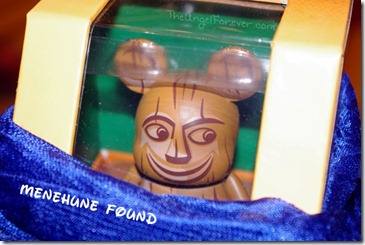 Before we knew it , it was time to head out to the beach and meet our families for a night on the sand and under the stars with our pirate pals.

Disclosure: Although we paid for our own trip to Disney World to attend the Disney Social Media Moms Celebration, we were given an incredible deal from Disney. Also note that Disney never asked us to blog about this event. As a long time Disney fan, it is my pleasure to share my experiences from the event. One Amazon Affiliate link is included in this post for Pinterest for Dummies by Kelby Carr. I will receive a percentage of money for the sale should you opt to buy any of the books through my links.