The importance of Child Car Safety

With the holiday season moving into full swing, families across the country are in the car and on the go.  Whether you’re driving across the country to visit family or across town to holiday shop, it is important that your child passengers are riding safely and that child safety seats are used correctly.

AAA estimated that 30 million people travelled this Thanksgiving holiday alone and, for many, this is just the beginning of the holiday hustle and bustle.  Now is the time to utilize the Child Car Safety tools provided by the U.S. Department of Transportation’s National Highway Traffic Safety Administration (NHTSA) and the Ad Council to learn more about proper car seat use and installation.  You will find informative resources that include instructional videos.

Have child passenger safety questions that you need answered before you travel over the river and through the woods to Grandma’s?  NHTSA is always available to answer your questions online through Facebook and Twitter.

Why is this so important to me? Back in July 2006, we were driving to the store. My husband was driving our van, I was in the passenger seat. In the back seat was my mother and almost 3 year old son NHL. We were on a six lane major road and had a green light. As we passed through the intersection, another car going the opposite direction made an illegal turn into us.

Our van went flying across six lanes of traffic while up on two wheels. After doing a 180 degree turn, we stopped in the grass looking back in the opposite direction. Someone was watching over us that day. On a regular day, oncoming traffic is usually heavy in the other direction. We were not hit by another car, we missed the center median (or I would have been a goner). The adults in the car were shaken up and my mother really hurt her back. The person in the car that jumped out of his seat with no complaints was my son thanks to his car seat. The car seat below had to be replaced since we were in a collision and the kiddo helped to pick out a replacement pattern. 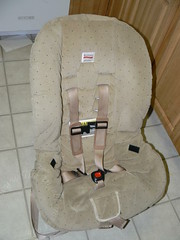 From day one, we took our car seats to a local dealer that had a specially trained car seat installer. Thanks to him, we knew our LATCH was done correctly. My then three year old is now a thriving 6 year old in first grade because his car seat did it’s job. 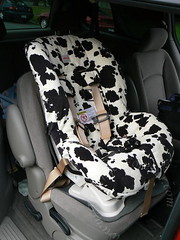 Remember, kids are precious cargo, so make sure your car seats are installed properly and buckle up when you hit the roads.

Disclosure: I am a member of Global Influence and asked to participate in their LATCH Cross Country Blog Tour. As a parent I felt it was extremely important to share these recources with others to protect all children that ride in cars.

When we woke up yesterday morning we knew it was going to be an exciting day.  We were going to trade in the old 1998 Toyota Corolla for a new car. Of course, a few things stood in our way. The car dealer needed the release on the lien, other papers had to be brought in, the loan had to be acquired and  a few other items. With the economy the way it is, and having been identity theft victims, we were a little nervous. The snow outside was just going to make things even more "interesting" in the scheme of things.

After JSL woke up from his nap, we went over to the dealer and brought the paperwork. I waited around while they looked it over. At that point they had me sign a paper that we were indeed going to purchase the car. As I was looking it over, I noticed that the money for the trade was missing. Ooops! That was fixed in seconds and I signed the proper forms. When I left they said they would call JL at work with figures on interest rates and loan offers.

JSL and I went to my parent’s house. My cousin M and her hubby B were in visiting from the other coast (more on their visit later). They had never met JSL before, so we went to spend time with them. Just before I went to pick up NHL from school I called JL at work. He said there was a little snaffu with the loan process. Apparently the security measures that we had put on our credit were working a little too well. He had to talk to the bank to finalize a few things. By the time I was at school getting NHL, we had a loan secured with a nice interest rate.

Of course, the snow did not really let up most of the day. We did not get a lot of it, but there was a lot of blowing and drifting snow. It certainly added to the anxiety of getting the old car in for a trade and picking up the new one. My family watched the boys and we left for the car dealer to pick up the new car. This was just before 5:00.

After a comedy of errors that included me leaving the title at my parents house (thanks Dad for bringing it to me), forgetting the check book, and the car getting stuck on ice when we tried to pull out of the lot, we finally got back for dinner just before 7:00.

Oh, before I forget here are photos of our new "baby" from this morning:

We are the proud new owners of a 2009 Nissan Sentra. Thanks to the size and amazing trunk space,  we will be able to use this car for mini trips to save on gas that my minivan guzzles. So yesterday we continued to do our share to help the economy and put ourselves into debt again. Not having a car loan for a few short months was nice, but this was a needed acquisition.

As previously mentioned, the cold weather is definitely here. I know how to bundle the boys up to head outside to stay warm. The trouble I am having is keeping some of the items on JSL once we are out and about. I will not even imagine the fun we will have with hats this year. Of course with the limited mobility from a winter coat that may not be a huge issue.

Right now my problem is best illustrated with the following photo from yesterday: 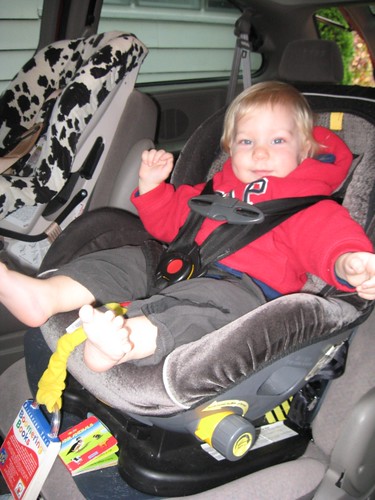 Do you notice the twinkle in his eyes, and the smirk on his face? Yes, even at 17 months old he knows to do this! Typically he yanks off his shoes and socks upon getting into the car. If I can stop him for a few minutes with a Wiggles song on it may take 3-5 additional minutes. Then I hear him fidgeting around in his seat. This is followed by a giggle and sweet little voice pronouncing "sock" and "shoe" as they come flying around the car with a big THUD! 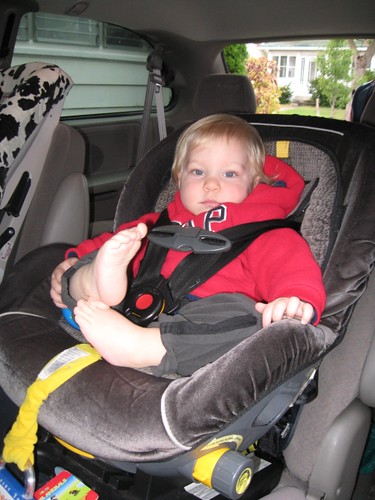 He is beyond stubborn and determined. No matter how I try to stop him his mission is always accomplished. I try not to make a huge deal out of it because that only encourages the situation. Still I am getting quite sick of being greeted with tiny little toes when I get JSL out of the car. Trying to find two socks and shoes launched in a van is tricky at best. 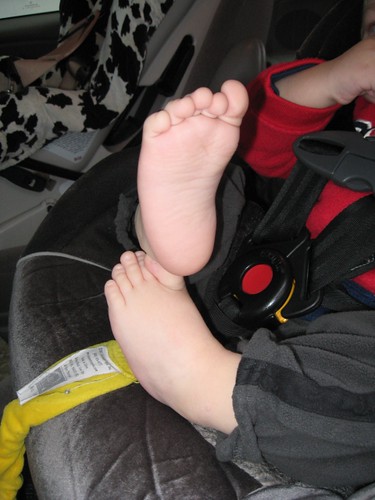 I worry about his feet getting so very cold this time of year. My hope is that once we switch to boots he may have a little more of a challenge getting them off. I am sure he will be able to toss those (at my head probably), but I will worry about that later.

So do you have any tricks that may help us out? If you do I would greatly appreciate any suggestions.

Why does this always happen?

I woke JSL up this morning to head to get an oil change and inspection for my car. I knew that my tires may not pass inspection since 3 were originals from four years ago and the other just replaced after the accident. JSL and I went to hang out with dad who works there and about an hour later the man from service comes by. I immediately knew it wasn’t good. If my car is simply ready he calls dad for me to leave. I said to my father “Oh shit, P’s coming that isn’t a good sign”

Sure enough once again car goes in for something easy and 3 hours and $355 later I leave. Luckily one part that was dead was covered under my extended warranty. That means I only had to pay $100 deductible instead of $300 – so the bill could have been $555 + labor for that part. This reminded me that my car had been bucking when I shift from say drive to reverse. Sure enough these are the root of it. So, I’m lucky they caught these before something bad seriously went wrong . . . like when we go to visit Uncle I and Aunt M in a short while. That would not have been cool.

Well, my father just called and the service guy was there with him. I knew it was crappy news. To add insult to injury JL’s car failed inspection. It needs new front breaks. The service guy said he fell off his chair when he heard that since it was what just happened to my car. We know that we just replaced a set of breaks on JL’s car last year, but think they were the back ones. We can’t remember and it wasn’t done there. I said screw it and told them to do it – we need the car to pass inspection. They are giving us a 25% discount since dad works there and they will have record and warranty the breaks. They said 12,000 miles or a year.

All I can say is thank goodness JL and NHL were still home when the call came in. They are late getting to temple for the last two days of Passover (I’m not going since I can’t sit in the horrible seats they have there). I lost it and he was right there to attempt to calm me down.

BTW – The service guy just went to show my father JL’s break. They were awful. He just wanted my father to see them. We honestly do not think that the front ones have been replaced since before we got married, so they really don’t owe us much . . . it was just the rotten timing.