Taking Your Toddler to an Amusement Park

Growing up, my family went to amusement parks a lot. We traveled to Disney World, Sesame Place,  Hershey Park, Six Flags, Busch Gardens, and countless other locations up and down the east coast. I have heard stories and seen countless photos of myself with Mickey Mouse as a toddler and even younger. Most of my personal memories of trips are from the time I was in kindergarten and beyond. 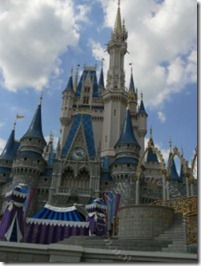 With the summer winding down and families planning trips for next year, many parents find themselves wondering if their child is too young to go to an amusement park. The answer in my mind is not to wait. You will make memories for your child to look back at in scrap books, and more important ones that you will hold close to your heart

When my husband and I were married, we said that one day we wanted to take our children to Disney World in Orlando. Our oldest son was born in 2003, so we said we would wait until he was ready to appreciate the experience. In December 2008, we made a decision to go on our first big family vacation to Walt Disney World the following spring. We knew that five year old NHL would adore it, but what about JSL who would turn two while there? 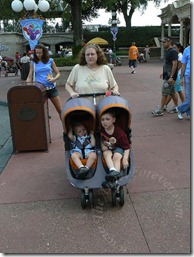 I spent countless hours researching restaurants, stroller rentals, diaper changing areas and other toddler must haves in an amusement park. I made a list of rides that would be suitable for my toddler, others that my older son could go on and we learned all that we could about child swap option (many other parks have similar policies). The child swap allowed us to get a pass for the other parent to ride on without a long wait while we swapped out staying with our little guy. This was fantastic and helped to cut down on more wait time with a toddler. Finding resources online from other parents, reading books and knowing my child were the most helpful items.

The truth is, toddlers will have fun in any location that you take them. If they see you laughing and smiling, chances are they will too. My son adored his time at Disney World. Will he remember that trip years from now? We may never know, but my husband and I will. We often look back at the trip photos with our now three year old and he points to the objects and cheers. If the opportunity to go comes along, take it and enjoy the special time with your family 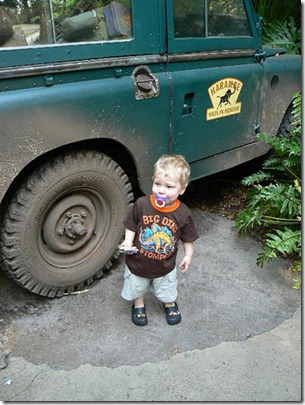 Have you ever brought your toddler or younger child to an amusement park? Let me know how it went and please leave tips for others in the comments below.

If you plan on going to Walt Disney World, let me know. I have a slew of resources that are amazing in addition to my posts here on The Angel Forever.

Disclosure: This post was previously published on a project I  worked on. The text is the same, but I placed additional photos and the question at the end for my blog. 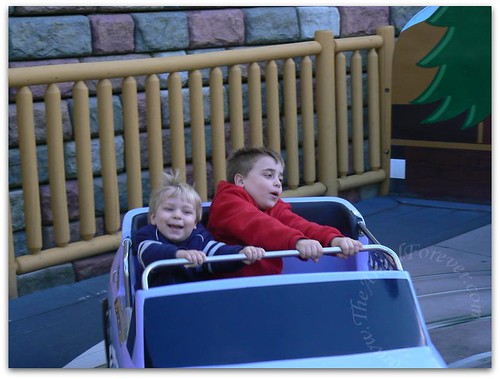 Not all amusement park First Aid are created equally

As the mother of two little boys, I have had more than my share of emergency room visits. Whenever we go on vacation, I secretly hope and pray that we will not need to call our doctor, visit an emergency room or require a prescription medication. Our boys have tested this several times. At my brother’s wedding, NHL was very sick and nearly had to go to the ER.

Of course, JSL the over achieving little brother, who must always top his big brother (be it febrile seizures or trips to the ER) taught us something else in February. While at Disney World on our family vacation part of the Disney Social Media Moms Celebrations (#DisneySMMoms), he got hurt twice (about the incidents from TechyDad). Thanks to the injury, our family visited Disney World First Aid twice. We now know the care that we received at Disney went above and beyond other amusement park First Aid. Here is a summary of the February incidents:

Injury #1: We were in Animal Kingdom and JSL was wandering around following NHL. He was getting tired and slipped on his own two feet. He face-planted right onto the concrete below him. He was hysterical and I immediately saw his forehead swelling. Lucky for us, the Animal Kingdom (and all Disney Parks) has First Aid stations clearly marked. We were able to follow the signs right to where we needed to go. We signed in and the EMT helped us assess the injury. He was great talking with us and getting us several ice packs to reduce the swelling on JSL’s head. We went on our way and thanks to that gentleman, JSL eventually kept the pack of ice on for a long time. 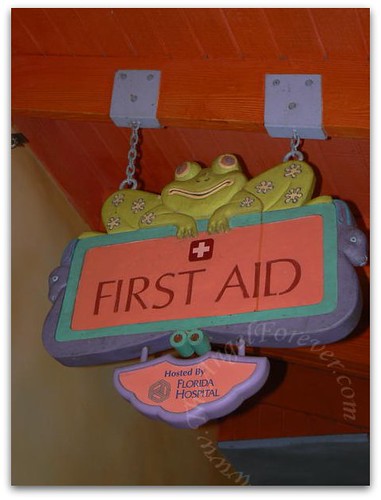 Injury #2: While I was at the DisneySMMoms breakfast, I received a text from TechyDad. He wanted me to know that JSL had gotten hurt. My heart sank and I did not know what to do. Eventually, I found out that he had fallen out of our rental stroller head first onto the marble floor at the Polynesian Resort. The Cast Members within the Polynesian were awesome. They gave TechyDad ice for the injury and asked if he needed anything else. They also took information about us down. TechyDad opted to take JSL to EPCOT, where I was located and have him checked at their First Aid. He did not feel that a concussion was involved and likely looked worse than it was since it was the same spot. First Aid at EPCOT was great and reassuring to hubby. Later that night, when we arrived back into our room at the Polynesian Resort, the phone was flashing. On the phone was a message from the manager of the resort. He wanted to see how JSL was doing. A phone number was given and told to call at any time if we needed anything else. Kudos to Disney for amazing follow through!

Although I was impressed at the time with Disney’s clearly marked First Aid areas and EMT workers, along with supervisors that follow-up, it did not register until recently. I guess I assumed that all amusement park First Aid would be the same. Please insert me slapping myself in the head for being naive. SERIOUSLY!

On June 19, we were using our season passes for our local amusement park. We were having an amazing time. TechyDad and NHL went onto a roller coaster together (kind of like Big Thunder Mountain for Disney People to compare). When they got off the ride, NHL was upset. They explained that his head was hurt at the end of the ride. We all went to find a restroom and regroup. When I got out of the bathroom, NHL started to really complain about his head. I looked down and started to see BLOOD coming through his hair. The kid has thick hair. At the mention of blood, NHL began to get upset. Someone cleaning the bathrooms saw what was going on and asked if we needed help. I asked where First Aid was.

The one and ONLY First Aid in this park was way at the back and they could not explain where it was. Sure it was on the map, but there were not clear signs pointing to it. (So spoiled from Disney experience) She went onto her walkie-talkie to ask First Aid to meet us. We waited there with our screaming child for 20-30 minutes. NHL would not let me really look and wanted them to see it. It was bad. They had to call numerous times and found that the original message was not relayed. FINALLY, someone showed up. NHL allowed him to look at the cut. It was long, but not too deep. I was given antibiotic cream to put on it and that was the end. 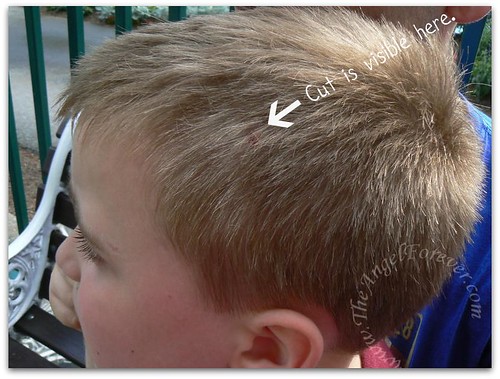 Of course, I wanted to know where the disconnect was. Why did it take SO long to have help?  The system at this park had failed and we are lucky it was not a more serious injury. I went to fill out a paper on the way out with my concern. My timing was amazing. The head of the EMT for the park was there, along with the gentleman that had helped us. I learned that there were only FOUR EMT in the park that day with well over 10,000 guests. Please note, this park is not just an amusement park with rides, it also has a water park section with pools and more. I could not believe my ears. The head of the EMT thanked me for writing this concern and said she hoped that more people would because it needed to be addressed by the powers that be. I was told that I would receive an e-mail or call from someone soon.

To date, I have still NOT received a call from said Park. In addition to the note I wrote on official paper, I also called and left a voice mail last week for a supervisor of the park. Nobody has responded. My son was injured on a ride – his head was cut and we still do not know how on said roller coaster. They never addressed that and more importantly nothing has been said about the lack of emergency responder/First Aid personnel in the park. To say that I am a concerned season pass holder would be an understatment.

You may wonder why I am writing this. Well, it really is not to complain. It is more of a warning to people visiting amusement parks this summer season. Look at your map and surroundings. Make sure you know where First Aid locations are and NEVER assume that it will come to you in a timely fashion. Have you ever had a First Aid experience at an amusement park be it Disney, Busch Gardens, Six Flags or Sea World? Please share and let me know.

Diving penguins and the boys 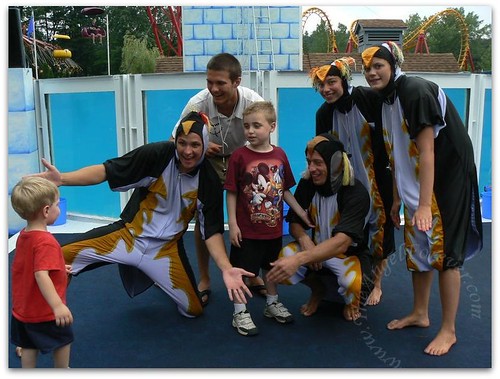 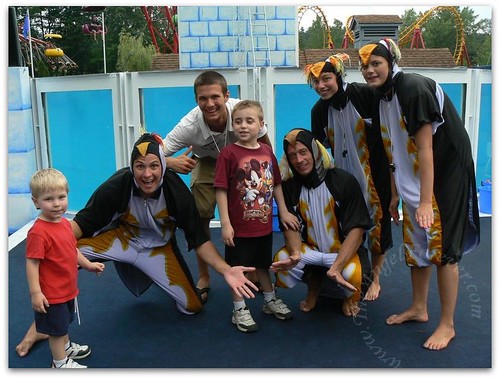 Family fun at The Great Escape

Last year, we bit the bullet and bought season passes for the Six Flags park that is near us. I never actually named the park in the past since I had not stated that we live in NY. This year, I will not only name the park, but was Tweeting from there all day today. For almost seven fun filled hours, the boys and I were at The Great Escape in Lake George.

We arrived there at about 10:30 this morning and left at about 5:30 this evening. We had a fabulous time in the gorgeous warm spring weather. The park was not too crowded and lines were short. We felt spoiled. When we arrived, we took the passes that we bought from NHL’s school and upgraded them to season passes. We saved $60 this way and used half of that toward a season parking pass.

Kudos to The Great Escape for making this process so easy this season. There were a bunch of stations set up and individuals could use computers alone to enter information and wait for the processing. It went very smoothly. Within minutes, we had our coupon booklets and were ready for the park.

Here are a few photos that I took with my cell phone today.

Many other memories were captured with our digital cameras to share later. Right now, we are scrubbing the kids and getting them to bed after they napped briefly while traveling home after the fun in the sun. 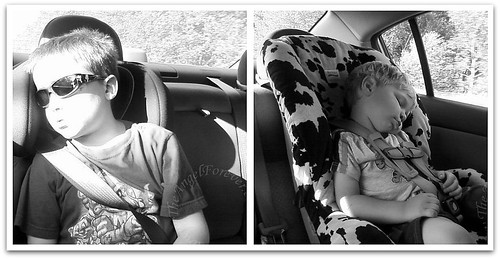 Disclosure: We purchased our own Season Passes from The Great Escape. This is a fun family destination that we like to visit over the summer and plan to blog about from time to time.